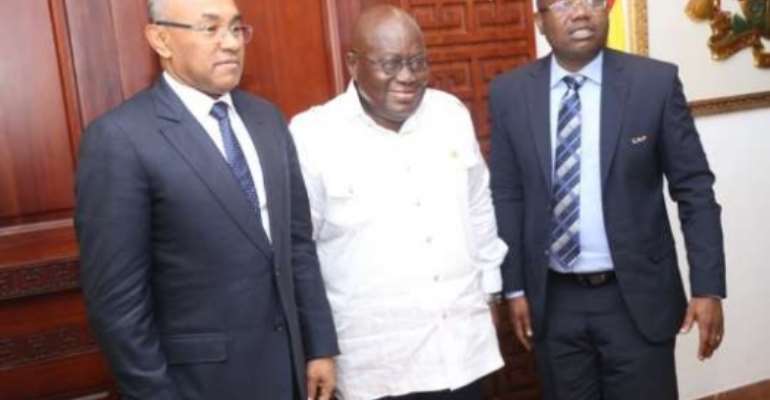 H.E President Nana Addo Dankwa Akufo-Addo has called on Ghanaian footballers to be motivated by the Aiteo CAF 2017 Awards to attain the highest standards in their football career.

According to President Akuffo Addo, the Annual award would fast-track the development of the game on the Continent.

The President said this when the President of the CAF, Mr Ahmad Ahmad called on him at the Flagstaff House in Accra on Wednesday.

Mr Ahmad was accompanied by CAF First Vice President Kwesi Nyantakyi and other executives of the Continent's football controlling body.

Mr Ahmad's call was to officially inform President Akufo-Addo of the CAF awards to be held in Accra on Thursday, January 4, 2017, at the Accra International Conference (AICC).

President Akufo-Addo stressed the need for further development of the sport on the continent, considering the passion people have for the game.

He expressed delight at CAF’s decision to hold this year’s awards in Ghana and pledged his support to the Continent's football controlling body and its executives to succeed in their vision for the development of the game.

Mr Ahmad was grateful to President Akufo-Addo for Ghana's support during the CAF elections and thanked the President in advance for honouring the event.

President Akufo Addo will grace the Award ceremony which will be held at the Accra International Conference Centre on Thursday evening.

The national under 20 female team, the Black Princesses have been nominated in the Best female national team of the year category.