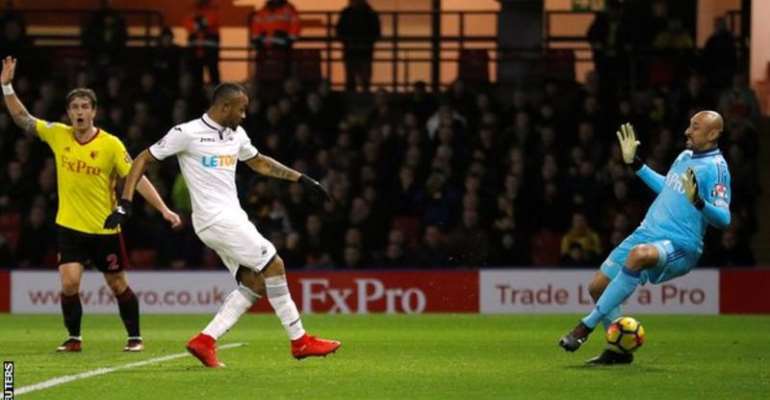 It was a hush weekend for Ghanaian players as only two players registered their names on the score sheet.

However performance-wise, there were plenty of positives from most of the players across some of the still active leagues as well as the lesser-known leagues.

ENGLAND
Daniel Amartey returned from suspension to play 90 minutes of action for Leicester City in their 2-1 defeat at Liverpool.

Collins Quaner lasted 82 minutes for Huddersfield Town in their goalless stalemate with Burnley.

Timothy Fosu-Mensah played the entire duration for Crystal Palace as they played out a goalless draw with Manchester City, which halted the Citizens'18-game winning streak. Jeffery Schlupp missed the match through suspension.

Jordan Ayew scored for the second week running for Swansea City as they came from behind to beat Watford 2-1 to end their four-game winless run.

In the Championship, Phil Ofosu-Ayeh missed the Wolverhampton Wanderers 2-1 win against Bristol City through injury.

Christian Atsu lasted full period for Newcastle United as they were held to a goalless draw by Chris Hughton's Brighton Albion and Hove.

Albert Adomah provided an assist for Aston Villa in their 1-0 victory over Middlesbrough to move into 7th position.

Andy Yiadom lasted 69 minutes for Barnsley in their 1-1 draw at home with Reading.

Dennis Odoi returned from suspension to play 74 minutes for Fulham FC in their 2-2 draw with Hull City.

In League One, Kwesi Appiah was not included in AFC Wimbledon squad that played 2-2 draw with Gillingham.

Joe Dodoo warmed the bench for Charlton Athletic in their goalless draw with Wigan Athletic.

In League Two, Hiram Boateng was taken off in the 95th minute for Exeter City in their 2-1 win over Barnet.

Elsewhere in the lower leagues, Nana Ofori-Twumasi picked a booking but lasted full period for Maidstone in their 1-1 draw with Aldershot Town.

Kwame Thomas played full throttle for Solihull in their 2-1 win against Barrow.

Nortei Nortey lasted 82 minutes for Maidenhead in their goalless draw with Halifax.

Harold Odametey delivered for Maidenhead in their 2-1 home loss to Fylde.

Koby Arthur warmed the bench for Macclesfield as they pipped Sutton 1-0 at home on Saturday.

ITALY
Kwadwo Asamoah warmed the bench for Juventus in their 3-1 win at Hellas Verona on Sunday.

Alfred Duncan lasted 72 minutes for Sassuolo as they drew 1-1 with AS Roma at the Stadio Olimpico.

Godfred Donsah lasted 63 minutes for Bologna in their 2-1 loss to Udinese at home.

Afriyie Acquah warmed the bench for Torino as they were to a goalless draw at home by Genoa. Isaac Cofie also faced the same fate for the visitors.

Rahman Chibsah and Bright Gyamfi warmed the bench for Benevento Calcio in their 1-0 win over Chievo Verona. It was the first victory for the Witches in the league after 18 matches.

PORTUGAL
Ernest Ohemeng climbed from the bench to help Moreirense draw 3-3 with Vitoria Guimaraes in the Portuguese League Cup. Joseph Amoah warmed the bench for Guimaraes but there was no place for Alhassan Wakaso in the squad.

Lumor Agbenyenu played full throttle for Portimonese as they drew 2-2 with Braga. Emmanuel Hackman lasted 66minutes for the Portimao-based outfit.

SCOTLAND
Prince Buaben was not included in Hearts of Midlothian squad that drew goalless with Aberdeen.

TANZANIA
Former Liberty Professionals striker Bernard Arthur opened his scoring account for Azam FC by scoring on his league debut in their 3-0 win against Stand United.