Yeboah Amankwah Reveals Why He Signed For Man City 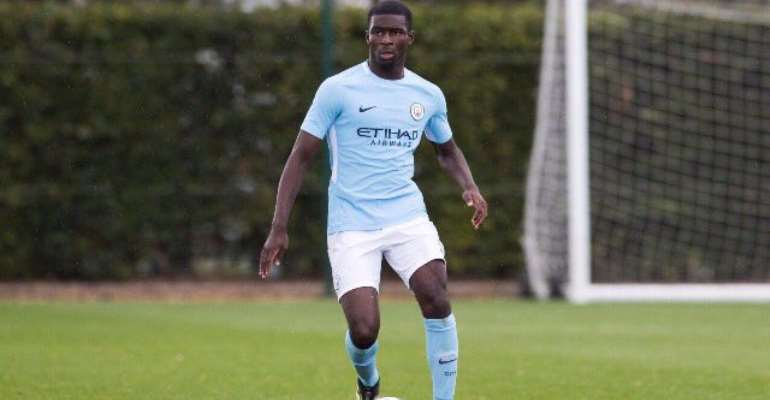 Manchester City youngster, Yeboah Amankwah has revealed why he joined the team instead of Manchester United.

Speaking in an interview with Melvina Frimpong Manso on Suncity FM 97.1 in Sunyani, the 17-year-old centre back said he wanted to improve on the technical side of his football.

Yeboah Amankwah who is an indigene of the Brong Ahafo Region disclosed that it was not easy to finalize his decision to join Manchester City due to the love he had for Man United.

“I support Manchester United. It was not easy but I think I made the right decision because of the way Man City play, I think that is where I wanted to improve more. Man United play well as well…I love both of them but I think the way Man City is structured, they play passing football and it is more technical,” he said.

“One day I was a bit sick…I didn’t go to school. My stomach was hurting. That day I was in bed and I got a phone call. Saying you can come back to City they wanna sign you. They will sign you tomorrow or next week if you want. I went to my Dad and Mum and informed them about the development. At the time I didn’t know what to do. It took me three to four days to make a decision,” Yeboah Amankwah revealed how it all started.

“Obviously, my Dad is a mentor and a Manager. He plays both roles. I also receive a lot of advice from Rio Ferdinand. He is like a big brother and a mentor. He is a free person and very friendly,” he said on those he takes inspiration from.

The young defender added that he looks up to a lot of footballers but he wants to be himself.

He stressed on how he wants to improve more on his skills and work hard for the rest of the season and years ahead.

Amankwah who is passionate about football is yet to decide whether to play his international football for Ghana or England.