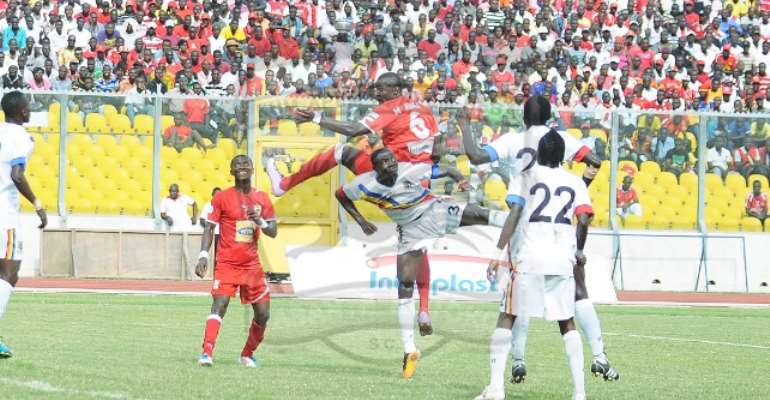 Accra Hearts of Oak and Asante Kotoko played a goalless draw game in the second leg of the [email protected] anniversary match at the Baba Yara Sports Stadium but Hearts won the trophy after their 3-1 win in the first leg of the encounter at Accra Sports Stadium earlier in the year.

The first half started on a very cagey note as both sides tried to establish dominance on the game but Hearts were the better side in the early minutes as they made the early strides into Kotoko goal area.

The Kotoko defence stood firm in the responsibilities as they have curtailed the attacking prowess of the Phobians with Felix Annan making some good saves when called into action.

The brightest chance of the first half fell for Kwame Boahene whose effort late in the first half was cleared off the goal line by Inusah Musah after goalkeeper Ben Mensah was completely beaten.

Notably, Kotoko, unfortunately, lost two of the key player Saddick Adams and Owusu Jackson due to injury at the end of the first half.

Kotoko were more purposeful in the second half of the game especially with the introduction of Jordan Opoku in the midfield area but their attacking prowess proved futile in the early stages.

Despite the dominance in possession, Kotoko have not created any clear cut chances to test Hearts goalkeeper Ben Mensah who was virtually having a field day.

A defense blunder by the Kotoko defense in the 78th minutes nearly gave Hearts the lead but Fexlix Annan salvaged the situation for the Porcupine Warriors.

Kotoko tried very to get into the lead but the central defense pair of Inusah Musah and Richard Akrofi were very firm as they curtailed any form of attacks from the Porcupine Warriors.

Hearts held on, to maintain their 3-1 lead in the first leg as the subsequently won the trophy at stake and a cash prize of Ghc50,000.