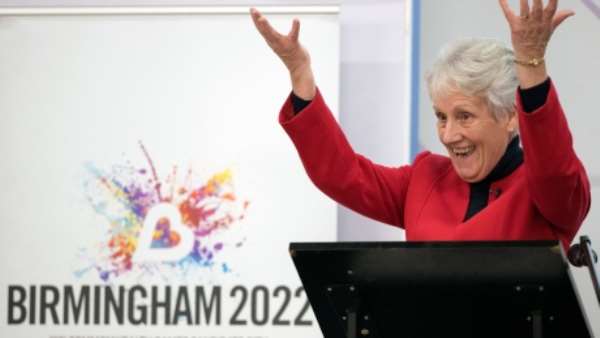 At a special Media Conference staged at the Arena Academy school in Birmingham, CGF President Louise Martin CBE applauded the city’s ambitious and innovative vision to engage and benefit its local community, showcase the best of global Britain and warmly welcome and inspire athletes and fans from right across the Commonwealth.

Birmingham 2022, which is expected to take place from 27 July – 7 August 2022, marks 20 years since Manchester 2002, the last time the Games were held in England. CGF President Louise Martin CBE said: “We warmly congratulate Birmingham and England on today’s announcement – it is a defining moment for this truly Commonwealth city.

With its rich history, cultural diversity, youthful dynamism and ambitious spirit, Birmingham embodies all that we cherish about the Commonwealth, and so the Commonwealth Sports Movement looks forward to collaborating with all the Games partners to showcase the city’s humanity and pride to a global audience over the coming months and years.

“The vast majority of the Games venues are in place, and with extensive experience in the UK of hosting successful major events – including Manchester 2002, London 2012 and Glasgow 2014 - the CGF looks forward to a truly spectacular Games that delivers not only for the 2.4 billion citizens across the Commonwealth but the wider world, too.

Today is a fantastic day for Birmingham, global Britain and our resurgent Commonwealth Sports Movement.” The CGF President also thanked Canada, Malaysia and Australia for the continued interest expressed in hosting a future Commonwealth Games, and confirmed that the Commonwealth Games Associations (CGAs) in these countries have signalled their potential hosting interest in either 2026 or 2030.

The final, complete Birmingham 2022 bid documentation was submitted by Commonwealth Games England (CGE), the Department for Digital, Culture, Media and Sport (DCMS) on behalf of the UK Government, and Birmingham City Council, supported by the West Midlands Combined Authority.

The foundations for the Games have now been laid, with the official handover to Birmingham set to take place at the Gold Coast 2018 Commonwealth Games Closing Ceremony on April 15 next year.

Secretary of State for Digital, Culture, Media and Sports Karen Bradley said: "Birmingham will put on a fantastic Commonwealth Games in 2022 and I am delighted that the Commonwealth Games Federation has awarded us the right to host what will be a sporting spectacular.

The Games will also give us a chance to show the best of Britain to the world, give great opportunities to the people and businesses of the West Midlands and beyond while inspiring many to get involved in sport.

Sports Minister Tracey Crouch said: "The UK has a brilliant track record for putting on the biggest sport events in the world and it is a great news that Birmingham has been selected to host the 2022 Commonwealth Games.

I am sure that we will put on an event that will make the country proud, leave a strong sporting legacy and strengthen relationships with our friends across the Commonwealth." Ian Ward, Leader of Birmingham City Council and Chair of the Bid Team, said: “This is a wonderful way to end the year and celebrate the festive season – with an early Christmas present for the city!

At the start of 2017 we were looking into the feasibility of hosting the Games in 2026, but when 2022 became a possibility in April, we made the decision to back ourselves even though we knew that we would need to do a lot of work in a short time frame. That work and belief has been rewarded. “This has been a team effort and the Bid Team would like to thank everyone who has contributed. We have had excellent support from residents and businesses in the city; our regional partners including Andy Street, Mayor of the West Midlands, and the West Midlands Combined Authority, the Midlands Engine, Local Enterprise Partnerships, the NEC Group, and the University of Birmingham; as well as venues, sport and cultural organisations across the Midlands.

We have also enjoyed a close working relationship with the Department for Digital, Culture, Media and Sport, the Commonwealth Games Federation and Commonwealth Games England. “The hard work begins now and we all have just four-and-a-half years to deliver an unforgettable Games that will shape the future of our city, our region and our people.

The Games will provide the opportunity to not only see world-class sport but bring economic and social benefits. “Above all, this will be our opportunity, along with the Coventry City of Culture the year prior to the Games, to showcase a resurgent, diverse and confident West Midlands to the world.” Ian Metcalfe, Chair of Commonwealth Games England, added: “I am delighted that the Commonwealth Games Federation has awarded the 2022 Games to England and to Birmingham.

In particular, I am excited about all the Team England athletes who will have the immense privilege of competing at a home Games, backed by many thousands of proud England fans. “England has a proud tradition of welcoming the world to our country and creating fantastic sports events, culture and the warmest of welcomes for the entire Commonwealth movement.

Today’s announcement by the CGF follows the Gold Coast 2018 Coordination Commission taking place earlier this month in Australia. Gold Coast 2018 organisers have committed to sharing all their experience and advice with Birmingham, passing on the baton and putting the city in the strongest position to deliver an inspiring, impactful and successful Games.

The Birmingham 2022 Organising Committee will also be the first to benefit from the new CGF Partnerships delivery model – as the CGF takes an increasingly active and direct role in the delivery of the Games through the creation of an integrated delivery team, working in close partnership with the host city and CGA.

This will help to deliver the Games more efficiently and economically and create a strong legacy for future hosts. Gold Coast 2018 Chairman, Peter Beattie AC said: “The Games in Glasgow in 2014 set the benchmark very high and delivered an exceptional experience for athletes and spectators and I am confident that Gold Coast 2018 will be another outstanding game.

“There have been many lessons learned on the journey towards 2018 with more to come as we move into Games time. “We are very keen to transfer as much of our knowledge as possible to enable the new host city to develop a robust Games business plan early in the establishment of the organising committee so they can literally hit the ground running when we hand over the flag at the GC2018 Closing Ceremony.”

PHOTOS: Ghanaians hit the streets of Accra for #FixTheCountr...
58 minutes ago