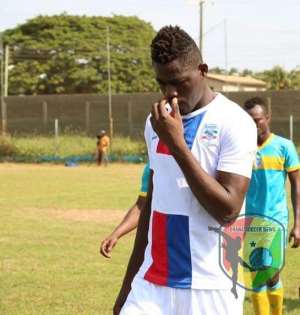 Liberty Professionals midfielder Simon Zibo has expressed his confidence of joining Aduana Stars ahead of the upcoming season.

The versatile enforcer has been strongly linked with a move to last season's Ghana Premier League champions Aduana Stars following his remarkable performance for the Dansoman-based club last term.

The purported move looked to have hit a snag as the two clubs failed to reach an agreement and report in the media suggest that, the player could stay with the Scientific Soccer lads next season.

However, Zibo says he is still hopeful of signing for the Fire Boys before the commencement of the campaign and he's keen to play a part in the club's CAF Champions League campaign next year.

"I am waiting for both teams to finish with negotiations before l will also meet Aduana for my personal term of services. I am still certain that l will move to Dormaa next season," he emphasized.