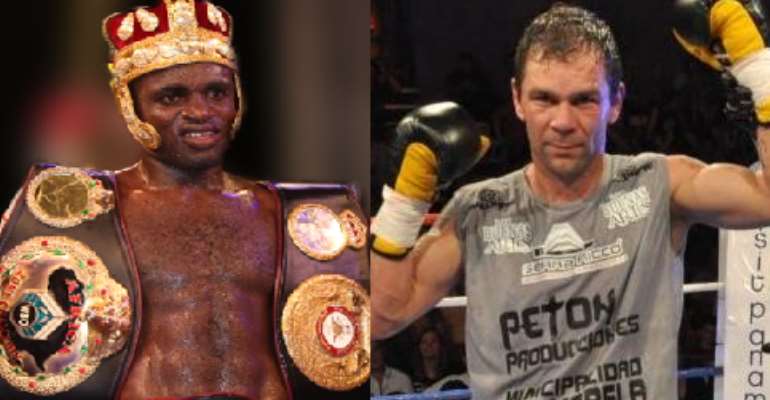 The IBO World lightweight title bout between champion Emmanuel “Game Boy” Tagoe and Argenis Mendez has been called off officially.

News reaching Yours Truly said Tagoe’s promoter Baby Jet Promotions filed a request for a new opponent earlier this month. Given the contractual terms between Tagoe and Mendez, Saucedo was approved. The bout will take place on Jan. 27. 2018

IBO World champions are allotted nine months to defend their title against an opponent in their top 35. Tagoe and Mendez were originally slated to fight on August 26th. The bout was subsequently moved to September 2nd. That date was postponed due to a Tagoe injury, according to Baby Jet.

“Tagoe was then given 90 days to defend,” says Ed Levine, President of the IBO. “We asked him on more than one occasion whether they had an extension agreement with Mendez. We received no response.”

“The deadline to defend the title (under medical exemption) was Dec. 2nd,” he continued. “That date also came and went. Around that time, we received a request for a different opponent.”

Mendez’s contractual agreement with Tagoe gave Baby Jet Promotions a “total out” from the bout, with no penalties or enforcement provision. Further, there was no extension agreement. Hence, their initial contract is void.

“The IBO should strip Tagoe,” said Lee Beard, Mendez’s trainer, who has also worked with Ricky Hatton and Joan Guzman. “This is what hurts boxing. First, Tagoe pretends he had an injury. There was no f*cking injury because if there was, he would have told us what it is. A doctor would’ve given him the time for recovery and they would have been able to settle on a date.

“Look at all the expenses Mendez has incurred. He’s been away from his family for months. This is family he’s trying to feed. They knew Tagoe was going to get his ass handed to him. Even Tagoe’s associates in Ghana warned him about fighting Mendez. That’s why they delayed the bout. Is there any good reason why he chose a new opponent?”

“If we found [Tagoe] breached the contract, we’d strip him,” IBO Pres. Levine said. “It’s a very poor contract, but there is no breach. Tagoe isn’t doing the honourable thing. However, it’s legal according to their contract, so he can do it.”

Samuel Anim-Addo, CEO of Baby Jet Promotions said the bout is happening,” he declared some time ago. “We are simply waiting for the doctor to give us a timeline, so we can inform the IBO, our shareholders and all involved parties. Once the doctors clear him, we will announce a new date.”

Tagoe, though talented, is unproven on the world stage. His finest victory to date occurred last December; a title-winning, unanimous decision over a 43-year-old, faded version of South Africa’s Mzonke Fana.

Fans, both locally and internationally, clamour to see 28-year-old smooth boxer against the world’s best. Mendez represented a major step up in class. The former IBF World featherweight champion shocked experts last May with an upset win over touted lightweight Ivan Redkach.

Mendez, who hails from the Dominican Republic and fights out of New York, began preparing for the Tagoe bout in June, moving camp to England to work with long-time trainer Beard. He’s been there since, awaiting a final date from Tagoe.

New opponent Saucedo is a month shy of his 36th birthday. Like Fana, the Argentine journeyman is much closer to retirement than he is his prime. More important, he represents a significantly lesser threat to Tagoe than Mendez.

“Let’s be clear, we all know why the fight is not happening,” said John Joyce, Mendez’s strength and conditioning coach. “We wanted that title, we were willing to go to Ghana for that title, but they realized what they were up against and got cold feet. I guess better cold feet than a cold body because Mendez would have knocked him stiff.”

Undefeated bantamweight Duke Micah recently stepped up the quality of competition and is poised for the next step in his career. And welterweight Fredrick Lawson is ready to do the same.