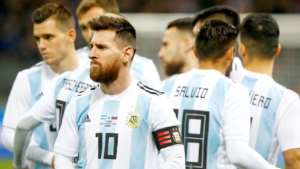 A key threat to Nigeria's high ambitions at the 2018 World Cup, Lionel Messi, hopes football "ends up paying" the debt the sport owes him at the global tournament in Russia next year.

The Barcelona superstar is hoping for a turn in fortunes at the World Cup, after losing three straight finals with Argentina in a three-year span.

Argentina trainer Jorge Sampaoli said after Messi's hat-trick in Ecuador in the 3-1 win in their last qualifier on Oct. 10 that football "owes Messi a World Cup."

The Albiceleste went into that match facing the threat of passing up a great opportunity of playing at the World Cup, securing the spot in the playoffs.

Messi's heroics earned Argentina a spot in one year from now's competition in Russia and again underlined the Barcelona forward's significance to his national team.

Now they have been drawn to face Nigeria, Croatia and Iceland in the same Group at the World Cup, with bookies offering tempting odds like the Best UK Free Bets Bonus Offers.

When asked to comment on the remark by Sampaoli, Messi told FIFA: "Yes, I heard it, and he said it to me as well. I trust football ends up paying me!"

He glanced back at those three finals - two Copa America and the 2014 World Cup - he has lost with Argentina and felt his national team "demand to win no less than two of those."

Messi says the 2014 World Cup last annihilation to Germany is as yet an open injury.

"It's going to be there forever," he said. "I don't know if they're ever going to heal. We're just going to have to live with it. The World Cup is a very happy memory and a bitter one too because of how it ended, how it all worked out. But it's always going to be there."

Messi is delighted to get the chance to try his luck at winning the World Cup despite the past title disappointments.

"It was very important because missing out on the World Cup would have been a huge blow, firstly for the squad as a whole and then for me on a personal level," he said.

"I don't know how I would have taken it. The same goes for the people of Argentina. Failing to make Russia would have been an all-time low for the country."

Argentina will face Croatia, Iceland and Nigeria in Group D at the World Cup and Messi wants his side to put up a better performance than they did in the qualifiers.

While lamenting their unimpressive showing in the qualifiers, their upcoming group opponents Nigeria dodged the possibility of missing the World Cup for fielding an ineligible player.

According to a BBC report, Abdullahi Shehu was ineligible to play the game after accumulating two yellow cards which should have seen him miss the game.

With Nigeria now confirmed to take part in the tournament, Messi prefers to remain cautious regarding Argentina's chances in Russia.