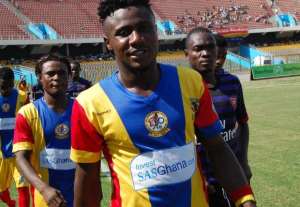 Ghana Premier League giants Hearts of Oak are set to re-sign Nuru Sulley ahead of the upcoming season, GHANAsoccernet.com can exclusively report.

The hard-tackling guardsman left the Phobians in 2015 to sign for the Turkish side Alanyaspor but had to terminate his contract with the club over unpaid salaries.

GHANAsoccernet.com can exclusively report that the 25-year-old is locked in negotiations with the Accra-based giants as he bids to relaunch his career.

Hearts of Oak are making efforts to revamp their defence following the departure of Vincent Atinga in the aftermath of last season and the signing of Sulley will suffice the void left by the towering defender.

Sulley was a key member of Black Stars B team that clinched the 2013 WAFU Cup of Nations trophy.