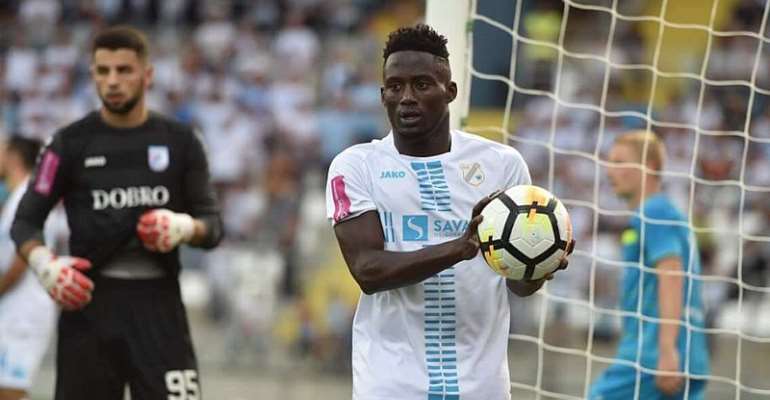 Ghanaian forward Maxwell Boadu Acosty is confident of HNK Rijeka returning to Europe next season despite their indifferent form in the Croatian Prva HNL League.

Acosty, 25, joined the Croatian side on a three-year-deal from Italian Serie A campaigners Crotone during the summer transfer window.

The hard-working enforcer initially struggled for playing minutes but has worked his way up in the plans of coach Matjaz Kek to make fourteen appearances, where he has provided two assists and netted once.

The Stadion Rujevica outfit are having an inconsistent campaign and are in danger of missing out on a European spot as they are sitting 4th on the table with 32 points, 15 points adrift of leaders Dinamo Zagreb.

However, Acosty says they are poised to book a place in next season's Europa League but they first have to be consistent to realize that goal.

"Before I joined this club [Rijeka] I knew a little about them but I've so much about them in a while and I can say we are the third force in Croatia after Dinamo [Zabreb] and Split [Hadjuk]," Acosty exclusively told Happy FM's Sintim Koree Chaskele.

"This season has not gone as well for us in terms of winning games but our performances are not bad. A prime example is our loss against Hajduk Split two weeks ago, we controlled the game but in the end, we lost 2-1. It was painful but we put our acts together and have won two consecutive games now after, so we are back on track."

"Right now the league is out of our reach so the only target for us now is to win one of the Europa League tickets, and it's within our reach but we have kept this form to achieve it," the former Latina Calcio player concluded.

Rijeka finished third in Group D of the 2017/18 Europa League hence missing out on a ticket to the Round of 32 stage.