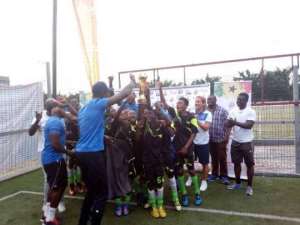 Led by their amazing talent, Meshach Sowah Adjetey, Lizzy Sports Academy were dominant in the first half scoring all four goals in the half. Dansoman Barcelona, however, came back strongly in the second half with a surprising performance, which got them three goals.

The under -13 tournament, organised by Centre 14 Sports and Entertainment, saw eight teams battling for the ultimate with the Spanish Soccer Schools from Dubai participating as a guest.

Meshach Sowah Adjetey was named the man of the match, with the Spanish Soccer Schools taking home the fair play award.

Lizzy Sports Academy for their price will represent Ghana next year in Dubai at the global edition in February 2018 and would compete with world-class teams like AC Milan, Real Madrid, Liverpool and Celta Vigo.