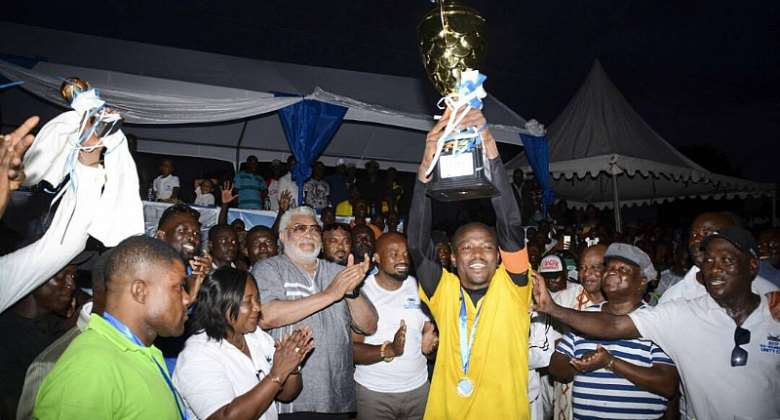 La skipper with the trophy aloft, while president Rawlings and Dr Mckorley look on

Soccer fans left the La Town Park on Sunday with high hopes that community football is not dead after all.

It was La Town XI who emerged tops after defeating their Tema counterparts 1-0 in an exciting game.

Hearts of Oak's and Black Stars forward, Kwame Kizito fetched the only goal of the game to hand the home side the trophy.

McDan Group chairman, Dr McKorley, described the tournament as a huge success saying, “I must commend all who contributed in one way or the other for making this tournament a huge success. What we have witnessed here gives me enough reason to honour my word of giving you an astroturf.

“Indeed, it has served the intended purpose; you could feel the camaraderie spirit among the players and the fans and all gathered here-the very reason for instituting this tournament.

“I was here for some of the games building up to the final, and I must say the level of competitiveness was high. The large numbers and crowd here attest to the fact that community football is alive and not dead as perceived out there.”

Besides the mouth-watering cash prize of $2,000, the winners, La XI took the Best Goalkeeper and top scorers prizes.

There were prizes for the Best Player, Best Goalkeeper and Best Team.