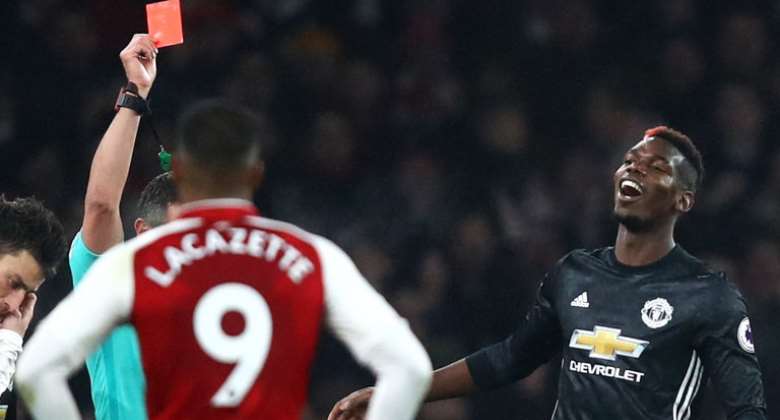 Paul Pogba will miss Sunday's Manchester derby after Manchester United decided not to appeal his three-game ban for his red card at Arsenal.

Pogba was dismissed in the 74th minute of Saturday's 3-1 victory for his challenge on Gunners defender Hector Bellerin.

After the match, United manager Jose Mourinho expressed disquiet at the decision, saying Pogba was "frustrated" at the reaction of some of the Arsenal players to his challenge.

"Without a doubt, it's a red card."
Pogba created two of United's three goals at the Emirates but he will now have to sit out Sunday's crucial game against Manchester City - who went eight points clear of second-placed United when they beat West Ham 2-1 - live on Sky Sports.

The France international will also be banned for the visit of Bournemouth next Wednesday and the trip to West Brom on December 17.

However, Pogba will be available on Tuesday night when United, who are looking to seal their place in the Champions League last 16, host CSKA Moscow.

Mourinho told the media on Monday: "He [Pogba] has just two days to recover for CSKA but he is very happy to play tomorrow and try to keep his momentum.

"Since he came back from injury, he has been phenomenal."