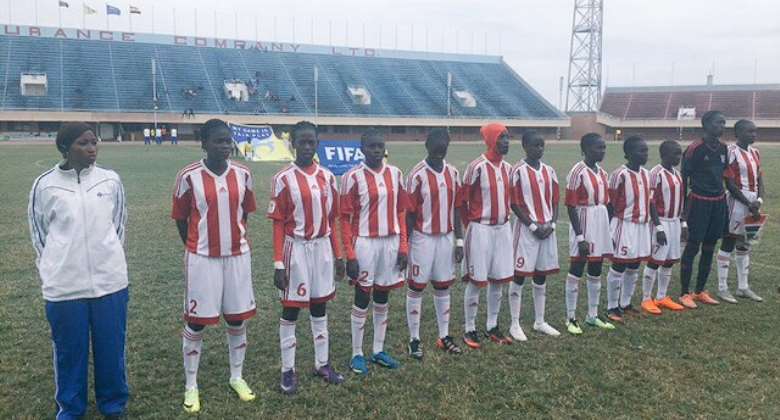 Favourites Cameroon, Ghana and South Africa made giants leaps for a place at the FIFA U-17 Women's World Cup Uruguay 2018, after huge wins away from home in the first leg matches of the penultimate round of the qualifiers at the weekend.

The trio recorded victories away from home with Cameroon humbling Algeria 4-0 in Algiers whilst Ghana triumphed 5-1 over Gambia in Banjul.

A brace from Ngah Manga and one each from Fatima Kome and Alice Kameni was enough for Les Lionnes Cadettes to sink the Algerians in front of their fans at the Omar Hamadi Stadium in Algiers on Friday.

Elsewhere, South Africa's Bantwana were simply too much for their hosts in a game that head coach Simphiwe Dludlu handed debuts to 11 players.

The visitors started on a high, grabbing the first goal in the first minute through Karabo Dlamini before Thambolinye Mzoneli doubled the lead on the quarter-hour mark.

Leungo Senwelo pulled one back for the Zebras on 16 minutes, latching on to a defence-splitting pass before firing past advancing Kaydee Windvogel in the Bantwana goal.

Four minutes before the break, South Africa extended their lead courtesy an own goal by Tshegofatso Mosotho, leaving the score at 3-1 at the interval.

In the second stanza, Bantwana continued from where they left off in the first half and increased their lead thanks to a Miche Minnies goal in the 56th minute before Jessica Wade put the icing on the cake with the fifth on 70 minutes.

Esalenna Galekhutle was denied by South African goalie Windvogel from the spot on 73 minutes but Senwelo gave the home fans a cause to cheer with a consolation two minutes from time.

Forward Mukarama Abdulai was the heroine for the Black Maidens of Ghana, scoring four goals in the 5-1 triumph over Gambia away in Banjul.

The 15-year old, on the books of Northern Ladies in her native, netted a hat-trick in the first half after Nina Norshie opened the deadlock in the second minute.

Fatoumata Sowe's 43rd-minute goal served a consolation for the Gambians as Abdulai grabbed her fourth three minutes from time.

The return matches take place in a fortnight, with the winners advancing to the final round, where Djibouti and Morocco are guaranteed places after Tunisia and Equatorial Guinea withdrew.

Three teams will represent Africa at the final tournament scheduled for 13 November to 1 December 2018 in Uruguay.

Host Ethiopia shocked visiting Nigeria to a 1-1 draw in their first leg clash of the First Round of the FIFA U-17 Women's World Cup Uruguay 2018 qualifier on Sunday in Addis Ababa.