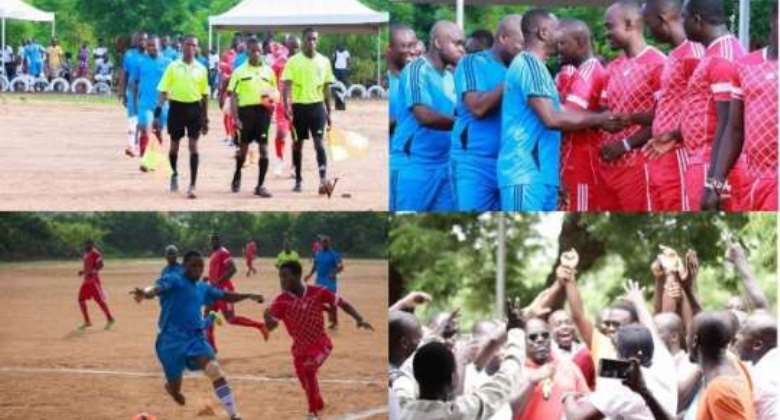 Honourables Club, an Accra based community and social networking club is set to play a special football gala dubbed the 'Presidents Cup'.

The one-day event, which is slated for 2nd December 2017, had the balloting for the second edition of the 'President Cup' over the weekend at the Center for Scientific and Industrial Research (CSIR) Park at East Legon in Accra.

The four-team gala cup will include Paper House FC, Yaw B FC, First Banc FC and Mazola FC as the participating teams.

The Honourables Club 'President's Cup' is a family out day event designed to encourage young families in the East Legon enclave to engage in physical exercise to promote healthy lifestyle.

It is also aimed at and promoting good health, as well as to promote community and social networking and foster cordial relations among the residents.

Key features of the event include, Clean-up Exercise, Donation (Any Charity Organisation of the club's choice) and bouncy castle, Trampoline for Children.

This year's event, which forms part of the club objectives, would be preceded with a sod cutting ceremony to commence the development of a sports complex for the society.

Mr Michael Akuffo Addo, Acting General Secretary of the Club noted that the objectives of the club is to portray the world in its wonderful state to sports lovers and maintain a healthy lifestyle.

He said the club as part of its Corporate Social Responsibilities has adopted the Dzorwulu Special School to party with every year and also donate to the school.

Mr Akuffo Addo, who is also the Deputy Head of Customer Service at GCB Bank Limited said, this act of benevolence and humanitarian works has helped in encouraging others and companies to also donate and show love to the less privileged in the society and named the Jonathan Mensah Foundation and Innova Trust Holdings as some of the donors.

According to him, members of the club believe in giving back to society especially the vulnerable and that other humanitarian services embarked by the club were, a donation to students at the Ghana Blind Union and a one-year school fees payment of one of the blind students of the Union.

'We have also supported some young footballers in the Club to the international level with some of them playing in the Arab league and in the lower divisions in Europe and a scholarship scheme programme for two brilliant but needy students within the vicinity the club resides'.

Mr Prince Daniels, Chief Executive Officer of Paper House, Security and Commercial Printing Firm and Mr Mohammed Munkaila, an Entrepreneur, who are team captains of Paper House FC and Yaw B FC respectively stressed on the importance of networking and socialization.

Mr Daniels expressed satisfaction with the balloting process and gave the assurance of his team's commitment to make the event a memorable one.

Mr Munkaila also called on the residents of East Legon to come out in their numbers to massively participate in the clean-up exercise to promote environmental health in their localities.

Mr Eric Forson, an event Organizer and a Member of the Club said the event would be graced by some sports personalities and very important personalities in the East Legon community and appealed to the residents to support the event and the club to achieve its goals, adding, 'the doors of the club is still opened for new members to join.'

The Honourables Club was founded in 2003 by six friends from the Mensah Sarbah Hall Annex B after their student days at the University of Ghana and has now grown into an 80-member club.

Its objective is to maintain a healthy lifestyle while developing on personal and professional levels, which cuts across all religions, ethnic, social and economic backgrounds.

Members of the Club hold high management positions in Blue Chip Companies in Ghana and has developed healthy professionals, who have impacted positively in the society at large.

The Club had over the years encouraged and supported entrepreneurs to run companies like Capital Hill Hotel in Cape Coast, Zooba Shop, which was awarded the best young entrepreneur in 2015, Paper House, one of the biggest printing firm in the country and Innova Trust Real Estate.