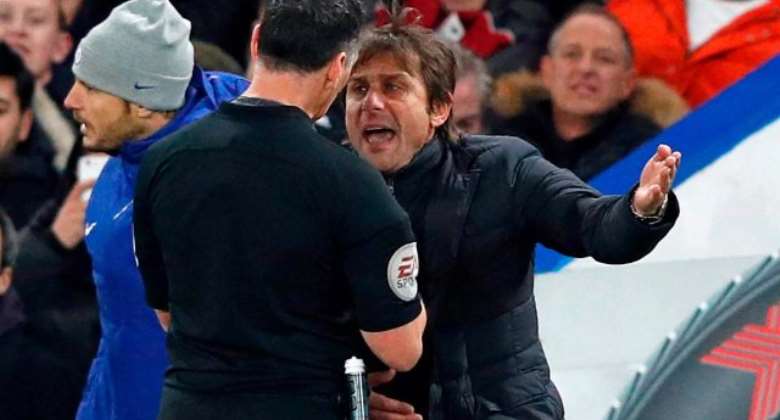 Chelsea manager Antonio Conte was ordered from the touchline as his side overcame struggling Swansea City at Stamford Bridge thanks to Antonio Rudiger's first Premier League goal.

Conte spent the whole of the second half watching from the stands after disputing referee Neil Swarbrick's decision not to award a corner when the game was goalless.

Chelsea dominated but had to wait until the 55th minute to find the breakthrough, Germany defender Rudiger heading home after N'Golo Kante's shot was deflected into his path.

Swansea did not have a shot on target as they fell to a fifth defeat in six Premier League games.

Chelsea remains third on the table while Swansea stays 19th, three points from safety, after a ninth league defeat in 14 games this season. Conte loses his cool

It was a difficult night for Chelsea until Rudiger's goal and that manifested itself in Conte's frustration boiling over when he argued with the match officials shortly before the interval.

The Italian was unhappy his side had not been awarded a 43rd-minute corner after a low cross by Pedro deflected off Swansea defender Alfie Mawson and behind.

Swarbrick instead gave a goal kick and that upset the animated Conte, who had seen his side carve out chance after chance without punishing Swansea.

PaFFAG exposes Bagbin over 2022 budget rejection, calls for ...
1 hour ago