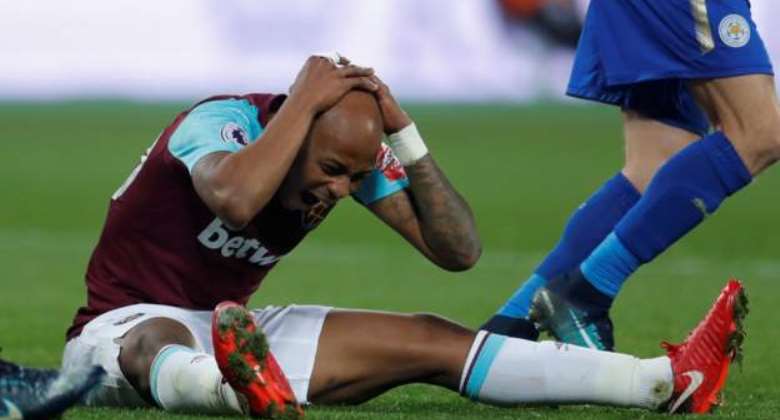 Marc Albrighton had given Claude Puel's Leicester the lead when he poked in Jamie Vardy's deflected cross on eight minutes.

Vardy nearly made it 2-0 with a curling shot before Kasper Schmeichel denied Angelo Ogbonna an equaliser at the other end.

But West Ham were level in the final minute of the first half, Kouyate heading in from Manuel Lanzini's corner.

Ayew came on to end a tireless shift from Arnautovic for West Ham and the Ghana forward took a tumble inside the area after being challenged by Harry Maguire in the closing stages.

The Leicester centre-back and referee Martin Atkinson were similarly unimpressed and Ayew was frustrated again in stoppage time when he emerged from a penalty box scramble to hook narrowly over the bar in the last opportunity of note.

The first win in six matches would have lifted the Hammers out of the bottom three but Ayew's overhead kick in stoppage time went just over.

The stop-start nature of proceedings resulted in six minutes of injury time and substitute Andre Ayew nearly nicked it with an acrobatic attempt following a goalmouth scramble but his effort flew inches over.

Leicester climbs one place to 11th ahead of the six Saturday matches.