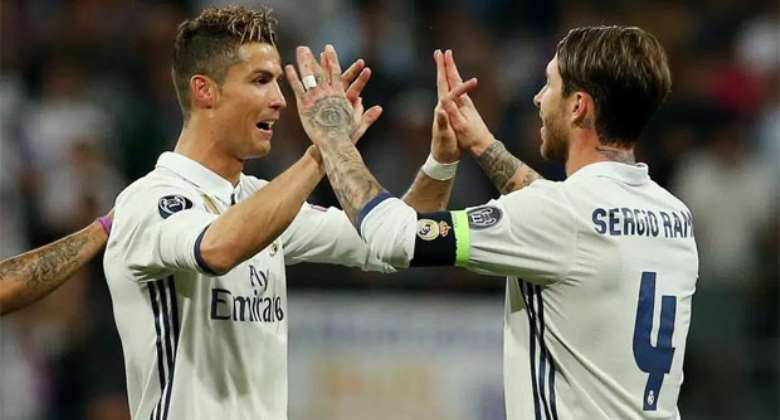 Real Madrid are at war behind the scenes as Cristiano Ronaldo and Sergio Ramos continue a very public falling out, according to reports in Spain.

With Zinedine Zidane ‘s side eight points behind La Liga leaders Barcelona after just 11 games of the season, tensions are escalating between two of the club’s biggest characters.

Reports in Spanish newspaper Marca claim that the Portuguese star’s stark assessment of where it has gone wrong have not gone down well in the dressing room.

Following the Champions League defeat by Tottenham earlier this month, Ronaldo attributed the downturn in form to the loss of James Rodriguez, Pepe and Alvaro Morata in the summer.

All three departed as Real pursued a more youthful first-team pool to freshen up a squad that had won back-to-back Champions Leagues.

Club captain Ramos offered a firm rebuttal, highlighting how Real had triumphed over Manchester United and Barcelona to win two Super Cup competitions in August, with young players coming to the fore in the process.

The trio that departed in the summer are seen as key allies of Ronaldo, including countryman Fabio Coentrao, with Rodriguez, a close personal friend.

Ramos, though, enjoys a good relationship with the new wave of young Spaniards emerging – Nacho, Marco Asensio and Dani Ceballos – while retaining the trust of key players such as Dani Carvajal and Isco.

The Spanish newspaper reports that Ronaldo views Ramos’ recent comments as rubbing salt in the wounds, from his open courtship of Neymar to his shrug of the shoulders response to questions over the Portuguese’s future.

‘Cristiano is leaving? Ask him, I don’t know about these things,’ Ramos remarked after Spain’s 3-3 draw with Russia.

That comment came hot on the heels of Ramos’ claim that ‘the door is open’ for Neymar at the Bernabeu.

Covid-19: Headache, body pains show the vaccine is working i...
33 seconds ago