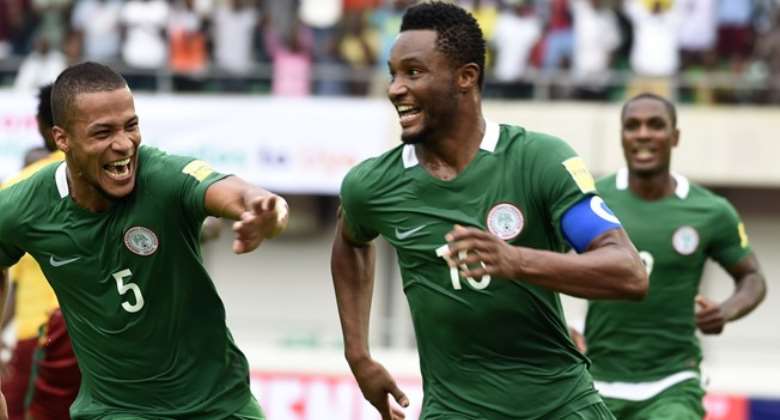 According to a statement from the NFF, the agreement was signed after a meeting between the players and the federation's chiefs on Sunday, where the details of payment structure and exact amounts were agreed upon.

NFF president Amaju Pinnick, who chaired the meeting, told thenff.com that the federation was determined, with the single agreement, to avoid the crises and confrontations that have undermined African teams' participation at the World Cup in the past.

Vice President Shehu Dikko spoke in detail about the agreement.

"We have concluded negotiations and come to an agreement with the team as regards bonuses, allowances and share of income from FIFA for the 2018 World Cup," Dikko said.

"Every detail has been agreed on match bonus for each match and each round up to the final as well as a share of income from FIFA money for each round until the stage we are able to get to at the finals. "We also agreed on preparation, such as how much players will be paid for the friendly matches, including how and when the monies would be paid," he added.

"We even delved into how the NFF would apply the funds due to it from FIFA after paying the players their share."

Captain Mikel John Obi, who signed on behalf of the players along with Ahmed Musa also weighed in on the new deal.

"We are very happy and excited about this development," he began. "This is the first time since I started playing for the senior team that I would see everything regarding preparation and bonuses and allowances put down in black and white and a binding agreement executed.

"It is reassuring that we now have a Federation leadership so committed to making everything work that they arranged this meeting and allowed the players to contribute and then set out to sign the agreement."

Players Kenneth Omeruo and William Troost-Ekong were also in attendance.

Pinnick and Sanusi signed the NFF while Rohr and Yusuf signed for the technical crew.

"The agreement represents the full and final understanding between the NFF and the team for the 2018 FIFA World Cup Russia and not subject to review or negotiations, except there is a review by FIFA of what it has approved and published as prize money for the participating countries," Dikko added.