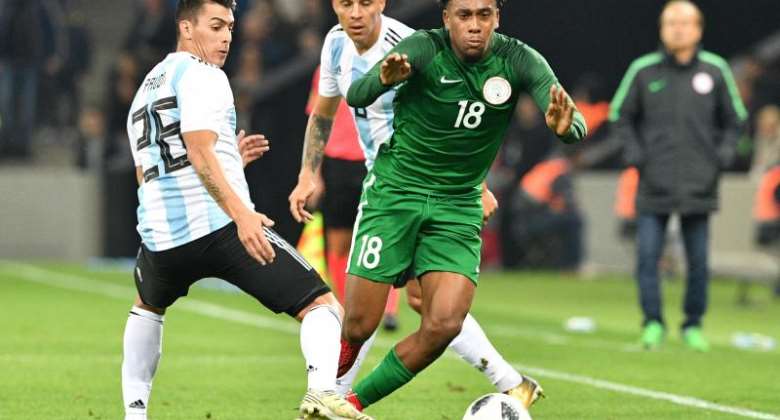 Alex Iwobi scored twice as Nigeria rallied from a two-goal deficit to beat Argentina 4-2 in a friendly in Russia on Tuesday.

Playing without the rested Lionel Messi, Argentina opened the scoring in the 28th minute when Ever Banega scored from a free kick, and it was 2-0 shortly afterwards when Cristian Pavon crossed for Sergio Aguero to tap in.

But Nigeria turned it around when Kelechi Iheanacho put a free kick past keeper Agustin Marchesin before the break, then set up Iwobi and Brian Idowu to score two minutes apart early in the second half.

Iheanacho found Iwobi in the centre of the box to equalise with a first-time shot, then Idowu pounced to score from 18 yards after the Leicester man's loose touch fell to his feet.

Iwobi then added his second goal in the 73rd minute after wrong-footing Javier Mascherano.

South Korea and Serbia drew 1-1 after scoring within five minutes of each other in the second half in Ulsan.

Serbia midfielder Adem Ljajic scored first in the 57th minute, and Koo Ja-Cheol equalised from the penalty spot after drawing a foul from Jagos Vukovic.

Son Heung-Min, who scored both goals when South Korea defeated Colombia 2-1 on Friday, missed a late chance to give the home side another win.

Colombia rebounded from the South Korea defeat by beating China 4-0 in Chongqing.

Felipe Pardo put the Colombians ahead with a shot from a tight angle after only six minutes, before Carlos Bacca scored on a counter-attack in the second half.

Miguel Borja made it 3-0 with a powerful half-volley from 20 yards, then added Colombia's fourth in stoppage time.

Juan Cuadrado missed the game after suffering a thigh injury, and he will return to Juventus for scans.

Elsewhere on Tuesday, Stanislav Lobotka scored in the final minute of stoppage time to give Slovakia a 1-0 win over Norway.

Mohammed Muntari scored in the 91st minute to help Qatar salvage a 1-1 draw with Iceland, while the United Arab Emirates beat Uzbekistan 1-0.