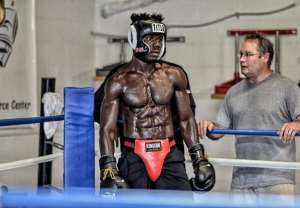 Ghana’s US-based light heavyweight boxer Sena Agbeko will return to the ring on December 8th when he takes on Juan Carlos Rojas in a light heavyweight contest at the State Fairgrounds Sports Arena in Nashville, USA.

The clash will be Agbeko’s fifth fight in 10 months after returning from a three-year self-imposed exile.

Agbeko have recorded four straight wins since returning to the four-squared circle – he defeated Timothy Hall Jr via a unanimous decision.

Agbeko stopped Christian Bruffy Holmes in his next fight, before destroying Shannon Miller in round two.

In his last fight, he claimed a unanimous decision win over Brad Austin.