We have to fight back, says Springboks coach Coetzee 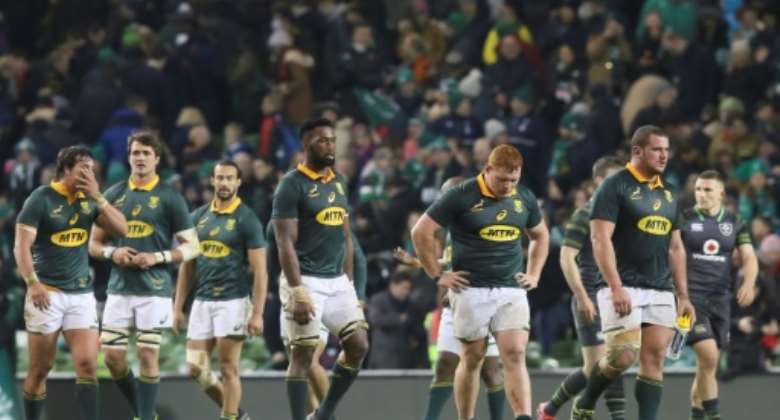 South Africa's players look dejected at the end of their rugby union Test match against Ireland, at the Aviva Stadium in Dublin, on November 11, 2017. By Paul FAITH (AFP)

South Africa have to pick themselves up and restore their pride after Ireland inflicted a record 38-3 defeat on them on Saturday, said a shell-shocked Springboks coach Allister Coetzee.

Coetzee -- whose position was questioned last year when the South Africans endured a terrible tour of the northern hemisphere -- gave credit to the Irish for being 'clinical' but admitted virtually nothing that had worked well in training had been played out on the pitch.

The South Africans go on to play France next weekend and Coetzee acknowledged there was a lot to work on.

"It is difficult to explain. It was disappointing and as a group we take full responsibility," he said.

"We have three games left on tour and we have to fight our way back.

"We lacked patience with our kicking game and they showed us you need patience to build from that," added the 54-year-old.

Coetzee, who will have to answer to Rassie Erasmus as director of rugby from December as he is returning from his similar role at Munster, said his side should been cleverer when they were chasing a 14-0 deficit.

"It becomes difficult to play catch up rugby because then you want to play a bit instead of using the kicking game.

"But Ireland were very clinical."

Coetzee, who has been in the post since Heyneke Meyer stood down after the 2015 World Cup, put down a lot of the Irish ablity to put away their chances -- they scored four tries, three of them in the final 10 minutes -- down to the experienced spine they have in the team.

"The reason I referred to them as the All Blacks of Europe is because of their decision makers," said Coetzee.

"We haven't won here a lot (Lansdowne Road) to be honest, not because we are lacking in effort but we are getting outsmarted the whole time.

"In 2014 (the Irish beat the Springboks the last time the met in Dublin) Conor Murray, Johnny Sexton and Rob Kearney were there and that makes a hell of a difference."

Coetzee, whose side has shown some resilience in rebounding from a 57-0 hammering by the All Blacks to lose by a point weeks later, said he may have to look at bringing in fresh blood although he was far from certain that would change things dramatically.

"One has to go and have a look again and see if there will be value added to the team," said Coetzee.

"The lineout is lacking and the tactical approach has to change and improve on that but the big thing is discipline.

"I have to look at players who can make a difference."

Coetzee admitted pressure would increase after such a loss but he added he saw areas where he could work on to improve the overall performance.

"Inconsistencies for me are something I would like to see improve," he said.

"At times we do play well but that should be a launching board.

"Coming from ball in hand rugby of the southern hemisphere we have to adapt to the northern style and conditions.

"We have to continuously put pressure on the opposition and the Irish have done it extremely well.

"We have to come out and learn from this one."