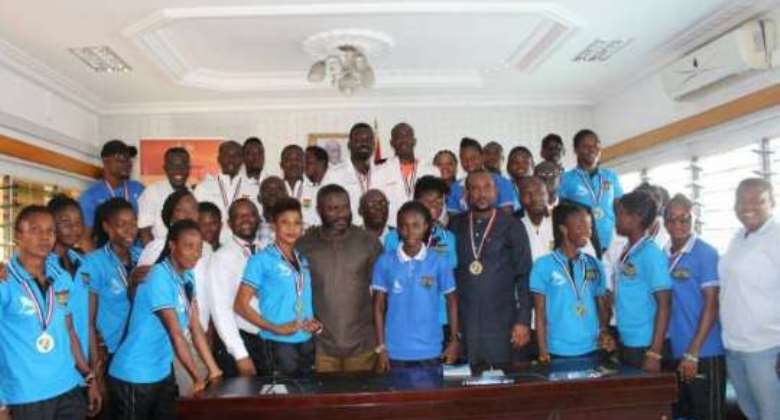 The Male and Female National Hockey teams have presented medals won at the just ended Africa Hockey Cup Competition in Egypt, to the Ministry of Youth and Sports (MOYS).

Both the male and female national teams won medals in their respective categories at the competition.

The team, which was led by the Ghana Hockey Federation (GHF), president Mr Richard Akpokavie noted that the teams did their best and strived to attain the feat through hard work, dedication and sacrifice.

“The teams had been training over five months and it has been a difficult journey throughout because of financing, but due to their love and commitment to the game they all made it to camp and prepared well for the tournament.

“All these young men and women sacrificed a lot all for the love of Ghana, so in recognizing how much they have achieved, we should know how much effort they have put in”.

Mr Kwadwo Baah Agyemang, Chairman for the National Sports Authority (NSA) Board, congratulated the teams on behalf of the NSA said “it is an honour for people to represent their country and not just go and be part of the event, but to come with medals.

Mr Baah Agyemang urged the team to fight to achieve more in the coming years to put as Ghana hockey teams among the best ten in the world.

Mr Pius Enam Hadzide, Deputy Minister of MOYS, thanked the team on behalf of the ministry and the President of the Republic of Ghana for raising the flag of Ghana high in Egypt.

“I welcome you warmly back to Ghana for your heroic venture in Egypt. I on behalf of the Minister, Government and the people of Ghana, wish to congratulate you on your achievements in the tournament.

“To the female team, I congratulate you for losing only to South Africa and for the male team I wish you the very best and better luck next time.

“The tournament was a learning curve and you all did your very best under difficult circumstances and as a government, we are confident in your capacity to even do better than you have already done and that we are expectant that next time the performance wouldn’t be bronze or silver but gold," he added.

Mr Hadzide noted that government is willing to support the various sporting activities to flourish as the ministry is prepared to balance the field to make funding available to all disciplines.

Meanwhile, the female national team has qualified for the next Gold Coast Commonwealth Games in Australia as they also moved to 30th in the world hockey ranking but 2nd in Africa, with the male counterparts being ranked 33rd in the world.