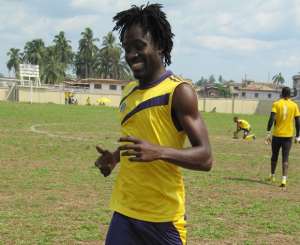 Kotoko are closing in on a deal for former midfielder Larbi Koomson, according to reports.

The former Medeama star is seeking a return to Kumasi after his career was nearly ravaged by a serious injury.

Koomson was released by Kotoko in 2016 after he suffered a knee injury at the club's training ground prior to the start of 2015/16 season's.

The midfielder launched a scathing attack on the previous management accusing them of neglect.

But he has been spotted in Kumasi to fuel reports of a potential return to the club.

It's unclear if coach Steve Polack has sanctioned the move but multiple reports say the club's management are keen on offering him a deal.

Kotoko wants to augment their squad ahead of their campaign in the CAF Confederation Cup next year.