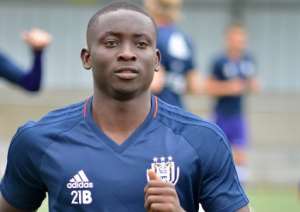 Striker Dauda Mohammed was on target for Anderlecht's reserve side in their 2-0 win over Royal Excel Mouscron.

The former Asante Kotoko arrowhead was fouled inside the box and he dusted himself to convert the spot-kick.

Kobe Cools gave Anderlecht the lead when he headed into a corner at the near post.

Watch the penalty converted by Dauda Mohammed below: