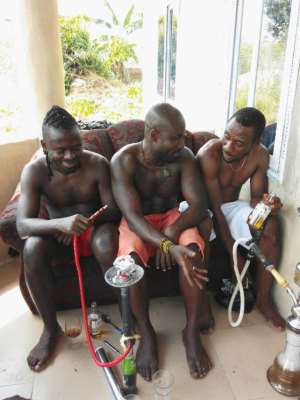 Ghanaian giants Hearts of Oak have been rocked by a new scandal after key player Malik Akowuah was caught smoking shisha despite the deep crisis facing the Accra-based side.

The holding midfielder has landed himself in BIG TROUBLE after being caught smoking in a shocking episode which could define his career at the Ghanaian giants.

The crisis in the giant Ghanaian club hit a new low when, Akowuah, a key player was pictured smoking shisha in the conservative West African country of Ghana.

The 26-year old is red-taped enjoying the shisha with former Medeama teammate Richard Adjei, another player whose career has been rocked by acts of indiscipline.

Akowuah, who endured a hellish and nightmarish time during the side's 3-1 defeat in the FA Cup final against rivals Asante Kotoko last week, has come under hot fire for his vices referencing his poor output in the final against their bitterest rivals.

A picture of the midfielder clutching the pipe has surfaced on social media - a revelation that can see his Hearts of Oak career come to a sudden end.

Akowuah has not been in the good books of Phobian fans since making the big-money move from Medeama SC to join the Rainbow Family a season ago with many lashing him for not living up to the hype.

The Phobian fraternity will surely not be happy with the player's conduct despite being off-season as they hold high moral standards in high esteem.

The revelation is set to infuriate the teeming supporters of the club, coming just one week after they were hammered 3-1 by sworn rivals Asante Kotoko in the 2017 FA Cup final clash to finish a trophy-less season.

This is the latest blow to hit the crisis-ridden club after recent setbacks including accusations of match-fixing and management's inability to tie up several players with expiring contracts.

Despite the Phobians making strenuous attempts to build a new image, Akowuah's scandalous smoking episode could damage their attempts to get new sponsors as he is pictured as a bad example for kids in a country where smoking has seen an immoral act.

"It's a great time to invest in Ghana, the safest country in...
56 minutes ago