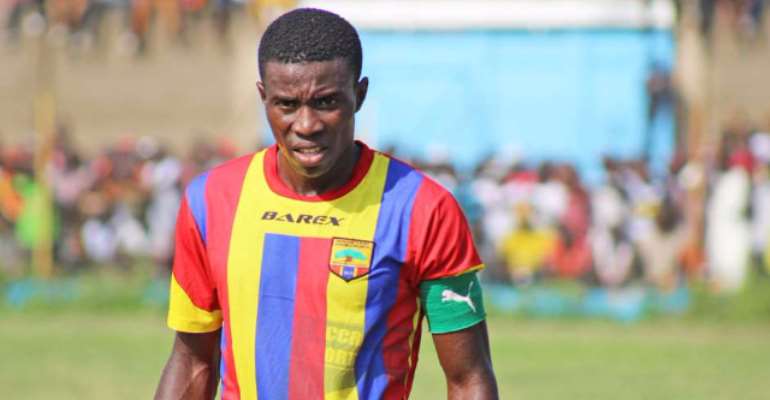 Hearts of Oak skipper, Thomas Abbey has applauded the supporters of the club for helping him to produce his best performance for the club.

The energetic midfielder returned from a career-threatening rib-cage injury to be the star man for Hearts in the 2016/17 league season.

Abbey scored 14 goals in the league, finishing as the club’s top scorer in all competitions and helped his side to finish at the 3rd position with 45 points.

However, the skipper insists all that wouldn’t be possible if not for Hearts fans.

“I remember this like yesterday when I got injured and was hospitalized at the Ridge Hospital. Hearts fans surrounded me all the time in that difficult time and I never felt lonely at the hospital before, during and after my operation,” the captain told accraheartsofoaksc.com

“I have not been able to forget how kind they were to me because a lot of them took time off their busy schedules to be by my bedside. It made me make a personal vow that I would repay the faith and support by giving 100% all the time.

“On a personal level, I am happy with what I was able to do this season. I just hope that I have gone in some small way to repay back what the fans did for me.

“I will forever be grateful to Hearts fans and I know there’s no way I can repay my indebtedness to them.”

Project Phobia, a supporter group of Hearts, also named Thomas Abbey as their Player-of-the-season and awarded him with a flat screen television, a citation, and a few other goodies.

“I was surprised to be honest when Project Phobia named me their Player-of-the-season,” Abbey revealed.

“It’s not something I was thinking about but once the fans have taken that decision, I can only say thank you. I thank them sincerely for the award and promise them that I will do all I can to make happy.”