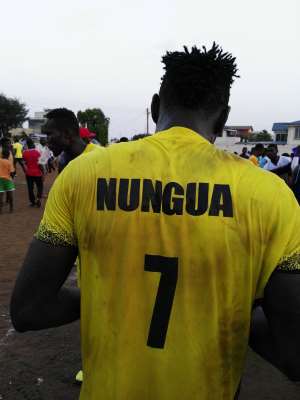 The second week preliminary match of the annual McDan Ga Adangbe Unity Cup between Nungua and Ga Mashie saw some splendid football displayed by both teams but it was the boys from Nungua who ran away with the three maximum points.

Nungua’s Patrick Bortey’s lone goal made the difference in the match which was well attended at the La Town Park.

Both teams paraded active players who ply their trade in the Ghanaian Premier and First Division Leagues with Ga Mashie featuring veteran Joseph Tagoe aka Bobby Short formerly of Accra Hearts of Oak.

His influence could not help the Ga Mashie boys as they even wasted a penalty in the dying minutes of the game.

Bobby Short said they were unlucky on the day, and the Nungua goalie was also very good in the post, making sure that his team qualifies for the next stage of the competition.

Most of the Ga Mashie players who spoke to Yours Truly said they were disappointed because they did everything to score, but the agile Nungua goalie was also at his keeping best.

Next week, Teshie take on Prampram at the same venue and they are under pressure to win as all the team that had participated in the tournament previously have qualified.

Tema will play Osu in the last preliminary round to determine who qualifies for the next stage of the competition.

The Semi Final will come off on November 20th, with the finals fixed for December 3 at the La Town Park.

Chief organizer of the McDan Ga Adangbe Unity Cup, Ayitey Dormon thanked the media for the publicity and education they are granting the public.

“Ballots without Bullets” Campaign out doored to intensify p...
31 minutes ago