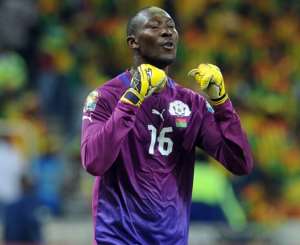 Accra Hearts of Oak and Kumasi Asante Kotoko will observe a minute silence in honour of their late goalkeeper Soulama Abdoulaye who passed on on Friday afternoon before kickoff at the MTN FA Cup final clash in Tamale on Sunday.

The sad news of the goalkeeper's demise hit the airwaves after a long illness.

This development, according to insiders, is by the request of both Hearts and Kotoko to honour the departed goalie.

The former ASFA Yennenga shot-stopper played for both Asante Kotoko and Accra Hearts of Oak before departing for his home country Burkina Faso.

Soulama Abdoulaye won the 2013/14 Ghana Premier League and FA Cup with the Porcupine Warriors before crossing carpet to join their bitterest rivals Hearts of Oak.

Soulama was one of the longest-serving goalkeepers in the Ghana Premier League after spending 10 years with both Kotoko and Hearts in his playing career.