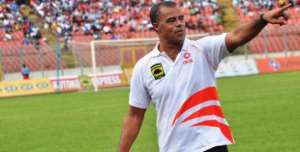 Steve Pollack, coach of Asante Kotoko has expressed optimism about his side's chances of lifting this year's FA Cup final against arch-rivals Hearts of Oak at the Tamale Sports Stadium on Sunday, October 29.

The two rivals are meeting for the first time in the finals of the competition since 1990. Kotoko defeated Hearts by four goals to two in that final.

This year final has been dubbed the 'unmissable' and it will give the people of Tamale the chance to see the two giants locking horns for the first in the region.

In a pre-match conference ahead of the game, coach Polack said the success of their season will be defined by what happens on Sunday hence anything but a win for his side will be disappointing, adding that, he is keen on making the fans smile.

The eight-time champions of the competition last won it in 2014 by defeating Inter Allies.

The winner of the 'unmissable' final will represent the country at next year's CAF Confederations Cup in addition to a GH¢150,000.00 cash price.