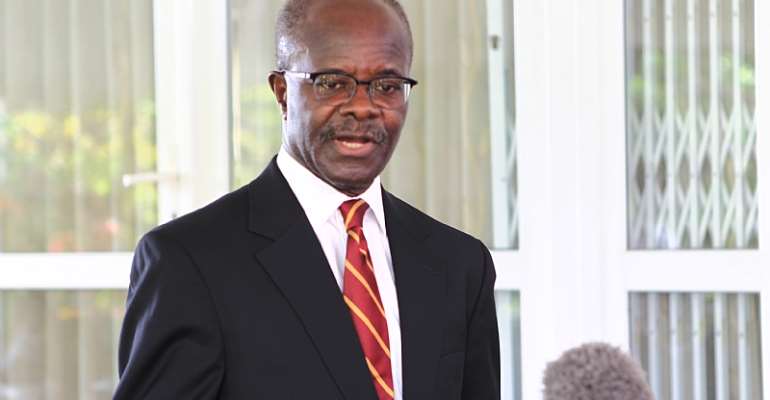 General Manager of Elmina Sharks, George Wiredu, have released a statement to respond to the media backlash emerging after their President of Dr Papa Kwesi Nduom, made serious allegations that there are bribery and corruption in the Ghana Premier League.

After Sharks to Aduana Stars by 2:1 at the Dormaa Park in the matchday 29 fixtures, Dr Nduom who is also the financier of the Progressive People’s Party (PPP) expressed his displeasure at how the match officials officiated the match.

He further went ahead and disclosed that Aduana Stars who have won the league did not win it merit and also indicated that there are huge bribery and corruption in the GPL.

A statement signed and released by the General Manager of Elmina Sharks, George Wiredu, reads:

We have in the past few days witnessed with shock, the backlash against club President of Elmina Sharks FC, Dr Papa Kwesi Nduom.

We are particularly worried about the fact that, there appears to be an attempt to shelve the important message the post carries but rather, resort to baseless equalization, accusations and counter-accusations.

The commentaries purported to be a reaction to the courageous posts of Dr Nduom have failed to deny any of the factors enumerated as haven been militating against the progress of Ghana football but rather resorted to not only vilify but also besmirch the image of the club president and the Club.

We expected the public to analyze and subject the issues and concerns raised to critical scrutiny in order to authenticate its validity or otherwise, but not to attack the person of Dr Papa Kwesi Nduom and the integrity of Elmina Sharks FC and take solace in cheap equalization.

It is interesting to note that the two FA officials (Albert Commey, Executive Committee Member and Takyi Arhin, Division One League Board Member) who have reacted to the Facebook post by Dr Nduom appear to confirm the claims made. None of them was able to deny any of the claims made but only tried to make nonsense of the claim by claiming Elmina Sharks FC has engaged in corrupt acts too.

We are disappointed in the fact that, these officials of the FA, in their commentaries, claim they knew Sharks had been engaging in corrupt acts yesteryears, yet, couldn’t take action nor raise any alarm, but only found their voices when the club President raised those critical issues.

It is obvious that they only sought to take shelter in the archaic propagandists’ tactics of ‘kill the messenger and ignore the message’.

We are by this release backing all the claims made by the President on his Facebook page.

It is our belief that as a franchise, the Ghana Premier League is not sacrosanct to the happenings in world football, and as such a collective effort is needed in making it an enviable brand across the continent and the world.

For this, we are not only resurrecting and standing by the claims he (Dr Nduom) made but also tasking the various stakeholders to appreciate the ills in our game and to make frantic efforts to tackle them.

As a club, we pledge our support towards any effort aimed at sanitizing the system and installing integrity in the game. We are of the view that to successfully fight the menace, all hands must be on deck and as such, there shouldn’t be an attempt to gag people or suppress the views of people, especially, when it aims at uncovering and addressing the ills in the industry.

It is in this spirit that we pledge to cooperate and support all the relevant agencies that have the mandate to help rid the system of manipulation.

We, therefore, call on all well-meaning Ghanaians to take interest and to also contribute their quota in any means possible to bring back sanity and to restore confidence in the industry.