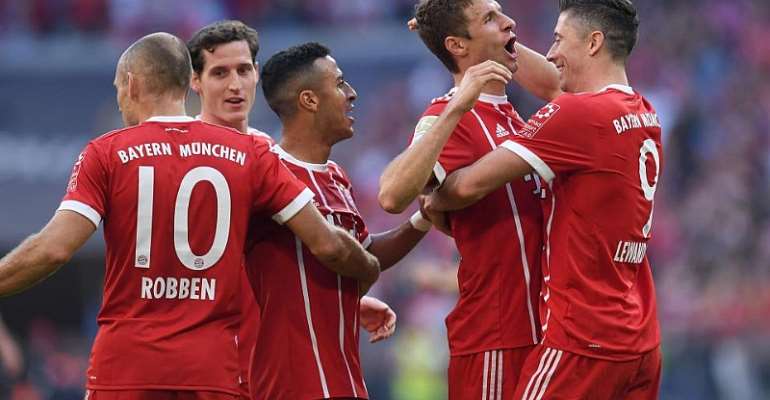 Jupp Heynckes made a perfect start to his fourth spell as Bayern Munich coach with a 5-0 thrashing of Freiburg at the Allianz Arena on Saturday.

An own goal from Julian Schuster put Bayern in front on seven minutes, and a flying header from Kingsley Coman doubled the lead shortly before half-time.

"We wanted to show what we can do straight away," Thomas Mueller told Sky Sports. "There will be a lot of people singing our praises in the coming days, but we need to just keep working well."

A fine strike from Thiago Alcantara put the reigning champions 3-0 up on 63 minutes, just moments after they had been denied a penalty by VAR. Further goals from Robert Lewandowski and Joshua Kimmich completed the rout.

"The team was awesome today, we deserved to win," said Thiago.

The win saw Bayern move within two points of Borussia Dortmund at the top of the Bundesliga table, before the league leaders' match against RB Leipzig later on Saturday.

Heynckes' men are two points clear of third-placed Hoffenheim, who twice threw away the lead in a 2-2 draw at home to Augsburg.

After Michael Gregoritsch had canceled out Benjamin Huebner's opener 15 minutes from time, Mark Uth restored the lead with a curling strike into the top corner for Hoffenheim.

Augsburg, though, equalized once again in the 89th minute, with Kevin Vogt deflecting a Jeffrey Gouweleeuw cross into his own net.

"We were the better team at times," Augsburg's Daniel Baier told Sky Sports. "We went to sleep a bit for their second goal, but the draw is a fair result."

At the other end of the table, Hamburg could celebrate scoring their first goal since August despite losing 3-2 to Mainz.

Alexandru Maxim's second-minute opener for Mainz was quickly canceled out by Walace, the Brazilian's equalizer ending a five-game goal drought for Hamburg.

Stefan Bell restored the lead shortly after half-time, however, before a Christian Mathenia error allowed Danny Latza to add a third. A late penalty from Sejad Salihovic was not enough for Hamburg to avoid defeat.

Genki Haraguchi was sent off before half-time, while Vladimir Darida conceded a penalty after the break. Leon Goretzka scored from the spot before Guido Burgstaller added a second on 78 minutes.

Schalke moved up to fifth after Hanover 96 were defeated 2-1 by a late Ante Rebic winner against Eintracht Frankfurt.

A Salif Sane header had canceled out Sebastien Haller's early goal in the first half, but Rebic struck on 90 minutes to inflict a first home defeat on Hanover this season.