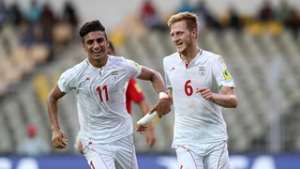 Iran claimed the top spot in Group C at the FIFA U-17 World Cup India 2017 after a 3-0 victory over Costa Rica in Goa on Friday.

Defeat for the central Americans sees them miss out on the knockout stages after earning just one point from three group games.

The Asian side secured their 100 per cent record in the group with two first-half penalties.

Captain Mohammad Ghobeishavi opened the scoring with his spot-kick on 25 minutes before Taha Sharaiati emulated his skipper with a penalty finish of his own four minutes later.

Team Melli cruised through the second half before adding a third goal just before the final whistle through substitute Mohammad Sardari.

The only disappointment for Iran at the Pandit Jawaharlal Nehru Stadium was a second yellow card of the competition for Ghobeishavi, which will rule him out of their Round of 16 matches.