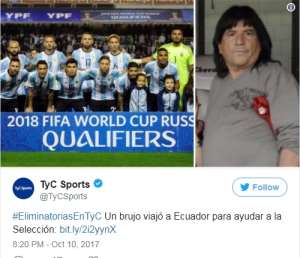 On the surface, it might seem like Lionel Messi is Argentina's best hope to salvage its World Cup dreams Tuesday when it meets Ecuador.

But lurking in the background, according to multiple reports, is the team's secret weapon — a sorcerer named Manuel.

Both TyC Sports and La Clarin, two reputable Argentine media outlets, have reported the man with a shoulder-length mullet flew to Ecuador this week to 'bring good energy' to the team, which has floundered badly in the World Cup qualifiers and is in danger of being eliminated from making the tournament for the first time since 1970.

The AFA apparently would not confirm or deny it had enlisted Manuel's services, although reports claim he was spotted at the team's hotel in Guayaquil, Ecuador, and later in Quito, where the Albiceleste will take on Ecuador.

It's unclear what Manuel's 'spiritual guidance' will entail, although one follower of Manuel in his hometown of Garina, Argentina, told La Clarin, Manuel does not rely on 'dark arts.'

'He sees a lot of things that others do not,' the woman, who did not provide her name to the paper said. 'He has a special energy.'

With the hopes of a nation on its shoulders, the Argentine squad will need all the help it can get as they ready to kick off in Quito at 7:30 p.m. Eastern.

Argentina has only won once in Quito, where the home team tends to have the advantage due to the city's high elevation.

Quito sits 9,350 feet above sea level, which can tire out players used to lower elevations more easily than those acclimatized to the thinner air.

A bigger problem for Argentina, however, might be the team's confidence, or lack thereof. Despite having Messi, the team has largely failed on offense, scoring just two goals in its last five qualifying matches. Messi scored just one of those off a penalty against Chile in March. The other score was thanks to an own goal by Venezuela in September.

On Tuesday, a win would all but guarantee Argentina a playoff spot at the very least, which would require Argentina to play New Zealand to earn its way to the World Cup, or could send Argentina straight through depending on the outcome of several other games going on simultaneously, including Brazil-Chile. If Chile loses, that would be a great assist to the Argentines.

In comments made Monday, Argentine Coach Jorge Sampaoli did not mention Manuel or any other mystical inspiration but instead urged his team to step up its game.

'The message I'm spreading to the players is that they have, on one hand, the altitude [of Quito], Ecuador, the challenges and the missed goals,' he said (via ESPN FC). 'But on the other hand, we have our belief, our players and the chance to be 90 minutes away to the World Cup.'

'We have Messi, all our different options and the fact that during the last two matches we have created 28 goal chances,' he added. 'If we are at Messi's level, the match will go very well.'