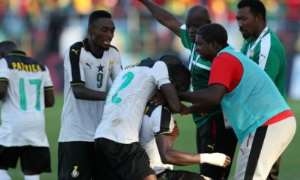 The Black Stars B beat their Guinean counterparts 2-0 in a group A encounter of the ongoing WAFU tournament at the Cape Coast sports stadium.

Ghana secured all the three points to top the group through goals from Samuel Sarfo and Kwame Kizito in the second half of the game.

The Guineans came back strongly in the latter part of the game to redeem the goals but the Stars defence held the Guinean attackers at bay to end proceedings.

Meanwhile, Mali held Nigeria to a goalless draw in an earlier match of the same group.

We're Disappointed In Akufo-Addo For Not Condemning Soldier ...
36 minutes ago