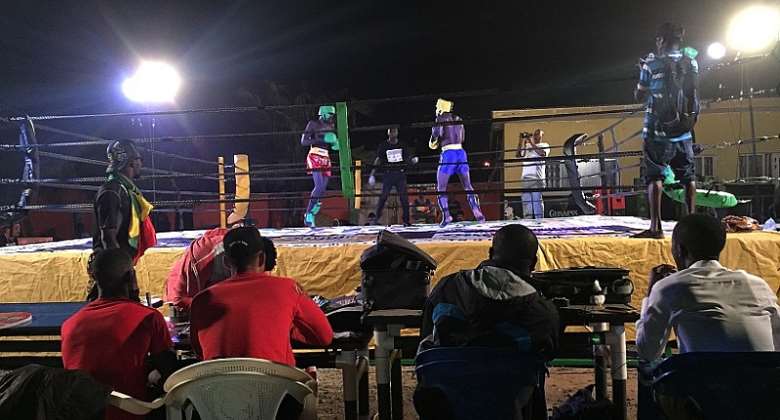 Ghana’s Aminu Quarshie fought brilliantly and gallantly to lift his national flag higher after defeating Alidu Seidu from Togo in an exciting and thrilling international match at the Korle Beach Resort on Friday night.

Back by the fans, Aminu went all out punching and kicking his opponent out of the ring.

John Asamoah aka ‘Madoza’ had a walk over as two opponents run away from facing him. Daniel Adjei and Daniel Boateng chickened out as the fled against inform ‘Madoza’ and Aziru Razak Ayuba of Togo.

All the boxers on the night displayed good sportsmanship and were awarded certificates from the promoter, Troy Robinson of UK based Bigzie Sports Promotion and Media Entertainment.

Troy Robinson thanked the Ghana Kick Boxing Association GKBA for their support and the various gyms whose fighters were represented, especially the Togolese team.

Korle Gonno based stars, Nii Fanny and King Jerry entertained the crowd with some of their old and new songs.

Most of the fans who spoke to Yours Truly after the programe said they want more of such events, at least once a month of sports entertainment at the Korle Beach Resort.

We take responsibility for letting Ghana down, pick the posi...
44 minutes ago