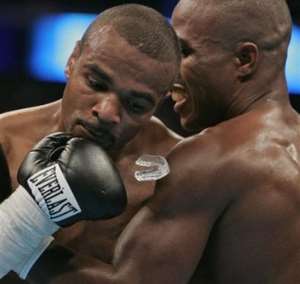 Former WBA welterweight champion and junior middleweight contender Ike Quartey made a victorious return to the U.S. with a 10-round unanimous decision over Verno Phillips. Quartey's last match in the U.S. had been a loss to Fernando Vargas for the IBF 154-pound title on April 15, 2000. He retired from boxing and returned home to Ghana. But he recently wanted to come out of retirement and fought in Ghana in January at 160 pounds. Quartey (36-2-1, 30 KOs) looked rusty in the first couple of rounds, but began finding his range midway through the match. Then Phillips (38-11-1, 20 KOs), the former WBO 154-pound champ, began to slow and Quartey picked up the pace. Phillips dropped Quartey with a short left hook in the eighth round, but it wasn't enough to close the gap on the scorecards. Pic: Verno Phillips of Denver, left, loses his mouth piece after being hit by Ike Quartey of Ghana during their ten round junior middleweight fight in Memphis, Tenn, Saturday, June 18, 2005. (AP Photos/Mark Humphrey)

Easing Of Restrictions A Ploy To Pave Way For EC To Carry Ou...
54 minutes ago