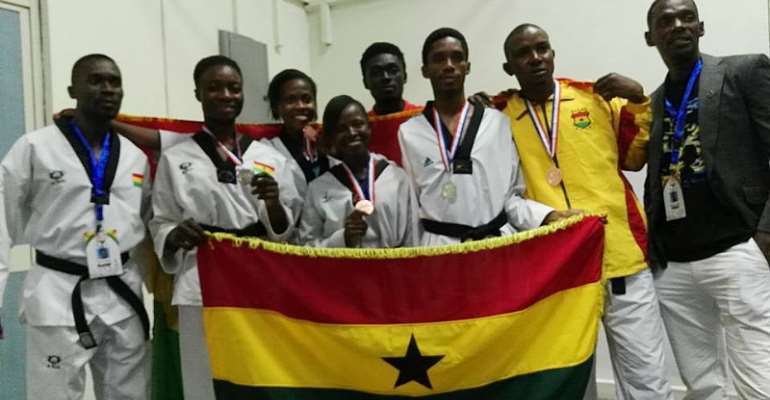 Ghana did not win a gold medal but the President of the Ghana Taekwondo Federation (GTF) Mr Frederick Out-Lartey feels content with the performance of Team Ghana.

He told the press after the First Ghana Open competition that, he was not disappointed by the performance of the of the athletes, adding that, Ghana’s team was young.

“I’m not disappointed by the team’s performance. Competitions of such nature is not all about winning medals but gaining the experience for future tournaments. Our athletes are young and there’s more room to groom them.”

Ghana got three silver and three bronze medals at the maiden Championship, which ended over the weekend at the D.G. Hathiramani Sports Hall of the Accra Sports Stadium.

Ghana presented 14 athletes and it was the six who stood tall to brush aside competition from their opponents to grab the six medals in a competition which saw 15 countries participating.

Cote D’Ivoire who stole the show by winning sixteen medals. The Ivoirians tally included five gold medals, one silver and two bronze by their female team, whilst the men’s team won two gold, one silver and five bronze medals.

Niger followed with the same number of medals but with a lesser number of gold medals, whilst Mali and Nigeria took the third and fourth positions respectively with Ghana placing fifth.

Burkina Faso also won two silver and three bronze medals to place sixth, Benin had one silver and one bronze to take the seventh position, whilst Togo and USA bagged one silver and bronze each for the eight position and Senegal with one Silver for the ninth position on the medal chart.

The Cote D’Ivoire female team was rated as the best and overall best team with Niger picking the best male team.

Robert Sarfo-Mensah, Director-General of the National Sports Authority (NSA) congratulated the GTF for successfully hosting the two-day tourney and urged the Ghanaian team to build on the experience acquired from the tournament to prepare adequately for upcoming. He advised them on mental alertness and discipline.

The Korean Ambassador who was impressed with the high level performance promised to continue supporting the GTF.