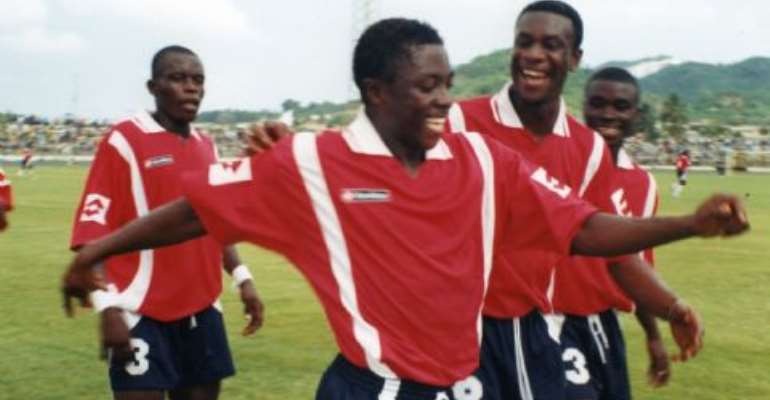 In preparation towards the resumption of the GT premiership competition Ashgold walloped their Under-20 side 2-0 at the Ofori Stadium on Wednesday 1st June 2005 courtesy experienced Kofi Deblah and Shaibu “Owen” Yakubu. The match was tension-packed following the seniors' recent 1-2 defeat they suffered when the two sides met last week. The match started on the bright note with the two sides exhibiting great skills and beautiful inter-positional passes that attracted applause from the few spectators that trooped to the Ofori Stadium.

The deadlock was however broken as a result of a three-man move between “General” Emmanuel Osei-Koffuor, Ofosu Amoah and Shaibu Yakubu when the later powered home the opener.

The Under-20 side accepted the challenge and fought gallantly to redeem their image but kudos to the well-knitted defence of Ashgold that proved so resolute to all the dangerous balls.

Kofi Deblah scored the second goal in the second half with a brilliant shot beating the goalie in post of the juniors that demoralized the youngsters. Wakasu Mubarak of Starlets fame featured for the junior side controlled the midfield so well and surged his men forward on several occasions but the defence of the seniors were too strong to penetrate.

When Wakasu Mubarak was interviewed after the match he confirmed that the seniors played so hard considering the fact that the Under-20 side beat them only last week since they could not afford to go down again. “We played well but they were so determined to avenge the 1-2 defeat they suffered. I think the best side won. We are going to make amends and beat them again before the resumption of the league.”

According to Opoku Agyenmang who was the joint goal king in the Under 17 tournament held in Gambia who played for the senior team, he urged the fans to exercise patience in the oncoming league match against Gomoa Feyenoord and said “the fans should troop to the Stadium in their numbers to support Ashgold wallop the Swedru lads. I will surely prove my worth come next week Wednesday to bring smiles to the faces of our mourning fans. I have been briefed about the hard times the team had gone through and the emotional expressions of the fans but soccer is full of uncertainties. We will collectively work very hard to restore the image of the club.”

He added “We know things will not be rosy on next week Wednesday yet the fans should rally behind us with cheers and songs just to keep us going and clinch all the three vital points at stake.”