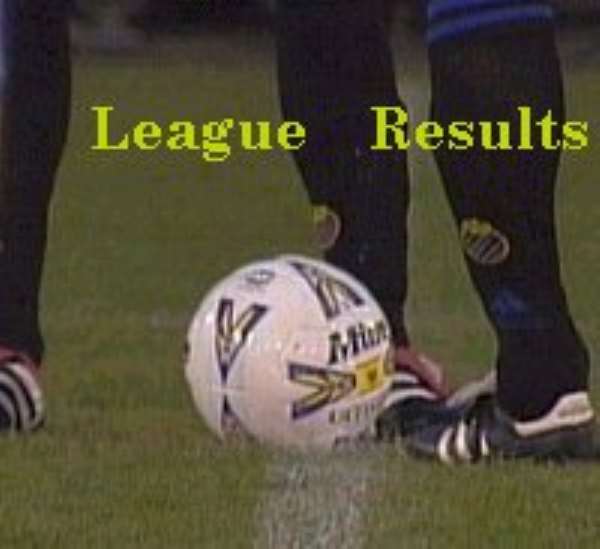 Kumasi, May 29, GNA - King Faisal and Liberty Professionals settled for a 1-1 drawn game in their outstanding GT Premier League match played at the Baba Yara Sports Stadium in Kumasi on Sunday.

The happiest player would be Prince Antwi of Faisal who shot his side into the lead in the 58th minute with a long range shot which beat goalkeeper Patrick Antwi while Michael Helegbe equalised in the 70th minute.

Antwi had earlier on missed a penalty kick with his shot hitting the cross bar and bounced into play in the eighth minute. Liberty led in attack by Peter Ofori-Quaye and Michael Helegbe made no nonsense of the strong defence of Faisal and in the 28th minute Ofori-Quaye hit the cross bar against the run of play.

Both teams resumed the second half strongly but it was Faisal who found the net through Prince Antwi when his 30-metre thunderbolt sailed to the blind side of the goalkeeper.

Faisal, determined to carry the day sent in Kwabena Poku for Sumaila Alhassan in the 64th minute and this nearly paid off when four minutes later Ben Wilson shot off target when a shot from Edmund Owusu-Peprah was pushed into play by goalkeeper Antwi.

Liberty then counter-attacked and moved deep into the vital area of Faisal and succeeded in equalising through Helegbe.

Faisal substituted Francis Ofori for Eric Gawu who was a thorn in the defence of Liberty in the 73rd minute and again brought in Osei Kofi for Ben Wilson in the 86th minute but this could not change the pattern of play until the final whistle.