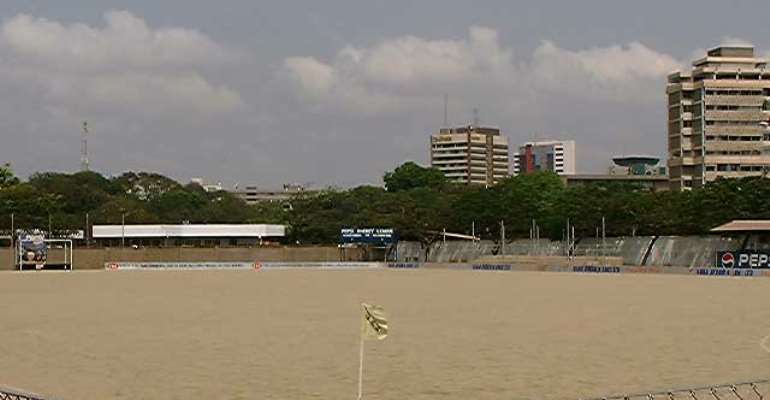 ...to Fix Damaged Portions of Pitch It is official now that the Ghana Hockey Association will have to raise not less than €17,000 to repair the damaged portions of the playing surface of the National Hockey Pitch.

The Report of the consultant appointed by World Hockey to assess the extent of damage and make recommendations, indicated that the playing surface showed signs of high use as evident in the reduction of the pile height from about 22mm to 15mm and consequently, the high sand quantities on the pitch. The report confirmed that the high damage was confined to the scoring circles (the Ds), especially at the tops and was therefore a serious injury hazard that needed to be checked immediately.

The report also indicated that to a large extent, the pitch has been well maintained since its installation in 1999 as there were no depression and other deformations that could influence play and cause danger to players and the seams were still intact and tight.

This report recommended that in view of the prevailing pile height (15mm), the carpet should be replaced in what was described as a wafer-like way taking the angles from the goal-line all the way to a few centimetres beyond the top of the D since it will cover most of the defects in the most economical way. This was preferred to replacing the carpet of the entire D or from the baseline to the 23 meter line since the damaged areas constituted less than 50% of the carpet in the entire D and there was a lot of useable turf.

With respect to the lifetime expectancy of the playing surface, the report indicated that one of the main criteria for determining was the pile length of the fibre. The report confirmed that the average pile height was about 15mm. The goal area, the penalty spot, the penalty corner mark and at the head of the D however had a lower pile probably due to more exposure during play.

An analysis in the report revealed that since the field was installed some 6 years ago at a height of 22mm and a loss of 7mm had occurred over the period, it could be inferred that a loss of an average of 1.5mm occurred each year. Considering the minimum pile length of 8-10 mm for acceptable play, one could therefore expect that the pitch will last for approximately another 4 years. The achieved lifetime will be then be some 10 years, a result considered to be good with such a high use and in so severe and adverse weather conditions, especially, exposure to ultra-violet rays of the tropical sun.

The report reiterated some key regular maintenance activities that should be carried out and advised that play at training-sessions should be more within the width of the pitch in order to unburden the D.

For the benefit of readers, we provide some basic information about the pitch: Installation date : June 1999 Product Astroturf : Stadia Turf PP 25/22 Sand filled Product with 22 mm pile height Base : hard crushed stone Use of play : very high, at least 1200 hours a year

U/E/R: Ban on all game except grass cutter begins today
52 minutes ago