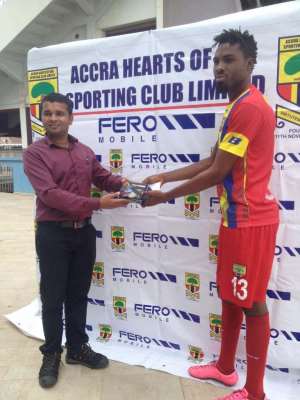 Hearts of Oak forward Kwame Kizito has been named the FERO player of the week following a stupendous show against Bolga Alla Stars on Friday.

Kizito scored twice in the game the visitors were condemned to a 4-0 defeat with the other two coming from in-form defender Vincent Atinga.

Apart from scoring twice, he also created another for Atinga when he was brought down for s a spot kick for the Phobians.

Kizito becomes the second player of the club to win the award after Leonard Tawiah picked the maiden edition some weeks ago.

FERO Mobile, dealers in modern sleek mobile phones and accessories, is the official sponsor of the Hearts of Oak player of the week and month awards.

The India-vased company came on board to sponsor the awards to motivate the players to give their all to help the club in the league.