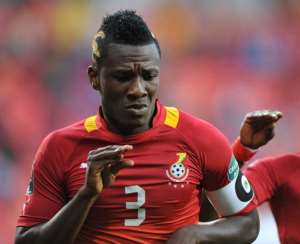 Black Stars captain Asamoah Gyan scored his 50th goal in the national team in the 2019 Africa Cup of Nations qualifier against the Walias of Ethiopia at Baba Yara Sports Stadium on Sunday.

The 31-year-old poacher opened the scoring for the four time Africa champions when he connected to a swift crossing from debutant Thomas Agyapong in the 10th minute to give the Black Stars an early lead.

The Shanghai SIPG forward is the fifth African to reach that feat with their national teams.

Godfrey Chitalu, Hossan Hassan, Didier Drogba and four time African player of the year Samuel Eto, are the dream set of players to have reached the 50 goal landmark in national colours.