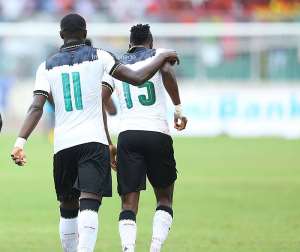 Black Stars got off to flying start in Kwesi Appiah's second stint as head coach as they battered Ethiopia 5-0 in their opening 2019 Africa cup of Nations qualifiers at the Baba Yara stadium.

FC Zurich top marksman Raphael Dwamena hit a superb brace on his debut with Asamoah Gyan Ebenezer Ofori as well as John Boye all scoring to help Ghana to the convincing victory over their Ethiopian counterparts.

The Black Stars took the lead in the 10th minute as their relentless early pressure paid off. Skipper Asmoah Gyan applied the finishing touch to a delightful cross by Thomas Agyepong. The goal was Gyan's 50th for the Ghana - no player has been able to such achieve such feet.

Ghana despite having a comfortable lead continued to dominate and dictate play with Ebenezer Ofori and Thomas Agyepong giving the Ethiopian defence one hell of a time. The Walia ibex will finally attack in the 29th minute but shot by Shemeles Bekele failed to threaten goalkeeper Richard Ofori. The WA All Stars shot stopper was virtually on a holiday.

Thereafter, the tempo of the game dropped slightly, as Black Stars controlled possession but were unable to make it count around the box.

However, with four minutes to recess, Ebenezer Ofori scored an eye-catching goal. The Vfb Stuttgart man smashed a powerful strike into the roof of Ethiopia.

Two minutes after recess, striker Raphael Dwamena opened his Black Stars account when he tapped home from close range as he was first to react on lose ball in the box. Before the FC Zurich man grabbed his brace on 60 minutes.

Ethiopia tried to find a consolation goal but the Black Stars held on to give coach Kwesi Appiah and go top of Group F.