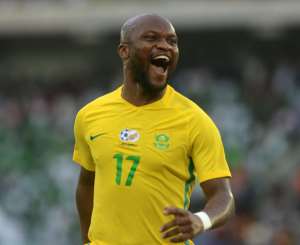 South Africa stunned Nigeria 2-0 in a 2019 Africa Cup of Nation qualifier at the Godswill Akpabio Stadium in Uyo on Saturday.

Bafana Bafana had never beaten the Super Eagles in a competitive fixture, but second-half goals from Tokelo Rantie and Percy Tau saw Stuart Baxter's side begin their Group E campaign with a vital three-pointer.

Nigeria enjoyed the lion's share of possession in the early stages and they created the first clear chance in the 11th minute when Wilfred Ndidi picked up on a loose ball on the edge of the box and sent a left-footed volley off target.

Midway through the first half the Super Eagles really should have claimed the lead, with Kelechi Iheanacho providing a low pass across the face of goal to find Oghenekaro Etebo, but his effort flashed wide of the far post.

South Africa settled into the match, but struggled to pose much of an attacking threat. However, they almost broke the deadlock in the 42nd minute when Nigeria goalkeeper Daniel Akpeyi dropped Tebogo Langerman's cross and Themba Zwane reacted quickly to the loose ball, only to hit the upright with his toe-poked shot.

Bafana Bafana found themselves defending for most of the early stages in the second half, but on 54 minutes they claimed the lead through Tokelo Rantie, who met Ramahlwe Mphahlele's cross and beat Akepyi at his near post with a downward header.

With 20 minutes of regulation time remaining the visitors should have doubled their lead, with a counter attack opening up a chance for Zwane, who again beat Akpeyi only to see his effort rebound off the near post.

On 78 minutes Nigeria almost forced an equaliser as Ahmed Musa and Etebo threatened in the penalty area and South Africa needed Dean Furman to make a desperate clearance from almost under his own crossbar.

Yet the visitors' second goal arrived in the 81st minute, with Keagan Dolly providing a perfectly weighted cross for substitute Percy Tau, who sprinted clear, rounded Akpeyi and turned the ball into an empty net to end the game as a contest.