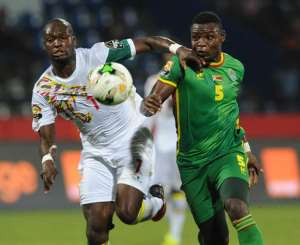 Senegal have gotten their Group A campaign in the 2019 Africa Cup of Nations qualifiers off to a winning start by defeating Equatorial Guinea 3-0 on Saturday night.

The result at the Stade Leopold Sedar Senghor in Dakar sees the Teranga Lions join Madagascar on three points at the top of the standings.

The Islanders surprisingly won 3-1 in Sudan on Friday.

Senegal got off to a flying start in the match and opened the scoring inside two minutes, with French-born striker Moussa Sow finding the back of the net to make it 1-0.

The West African giants surely hoped the early goal would open the floodgates in the match, but they had to wait until the 73rd minute to double their advantage, with Sow again on target to make it 2-0.

And the third goal arrived in injury time at the end of the match, with Premier League-based midfielder Idrissa Gueye wrapping up a 3-0 triumph.

The victory for Senegal serves as sweet revenge for their surprising loss to Equatorial Guinea in the group stage of the 2012 AFCON.

The teams will resume their 2019 AFCON qualifying campaign in March next year: Equatorial Guinea will host Sudan, while Senegal will travel to face Madagascar in a top-of-the-table clash.