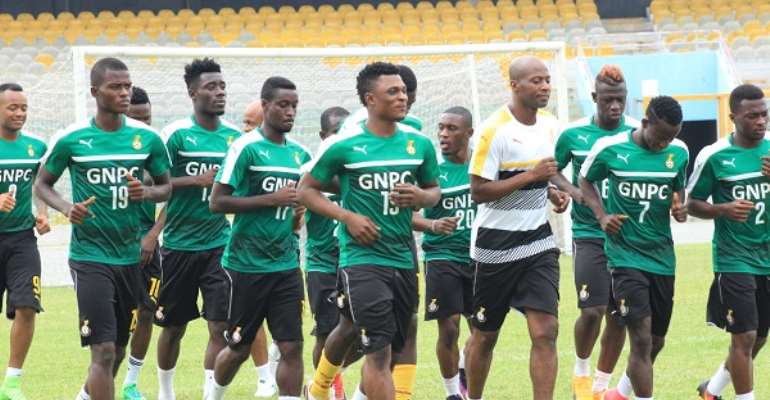 Black Stars coach Kwasi Appiah begins his first major test of his second stint with the team today when they play the Walias of Ethiopia at the Baba Yara Stadium in Kumasi in a group qualifier for the 2019 Africa Cup of Nations.

Appiah aims to pick one of the slots for the 2019 AFCON in Cameroon and make his comeback successful in order to make a strong case for local coaches.

And he is expected to present the country's strongest squad yet to get their campaign off to a flying start, with debutant Raphael Dwamena of Swiss side FC Zurich likely to lead Ghana's attacking force to do the damage to the Ethiopians.

Dwamena is the new kid on the block and one who won the hearts of football fans in Kumasi after winning them over with his speed and precision at the fine-tuning exercise.

Indeed, Dwamena's hunger to succeed with the team is understandable having been axed from the 2015 African Nations Cup squad by former, Israeli trainer, Avram Grant.

On account of his performance at training and in the 6-1 drubbing of Deportivo, it is the expectation of fans that left-footed Dwamena would make it to the starting lineup tomorrow and replicate the performance that saw him score 12 goals for his Swiss side in the just ended season.

The Stars will make a return to the Baba Yara Stadium after three years absence and the skipper, Asamoah Gyan, who is expected to partner Dwamena in attack, has promised sweet victory to win back the fans.

The rallying for support by the management of the Black Stars led by its chairman, George Afriyie, has been phenomenal and if the support exhibited at the training sessions is anything to go by, then a huge crowd is likely to fill the stadium to cheer the team to victory.

Coach Appiah is blessed with a group of young and hungry talents coupled with some old guards who are familiar with the terrain and the pressure that comes with such matches.

Skipper Gyan, the Ayew brothers (Andre and Jordan), Jerry Akaminko, Jonathan Mensah, Harrison Afful and John Boye have a wealth of experience to help ease the pressure and anxiety of their younger colleagues, including Dwamena, policeman Samuel Sarfo, Thomas Partey and Frank Acheampong, and to excel.

Yesterday, after receiving the blessing from the Asantehene, Otumfuo Osei Tutu II at Manhyia, the players honoured their word by giving to the Kumasi Children's Home, presenting assorted items worth hundreds of Ghana cedis to 'open the heavens for them on Sunday.'