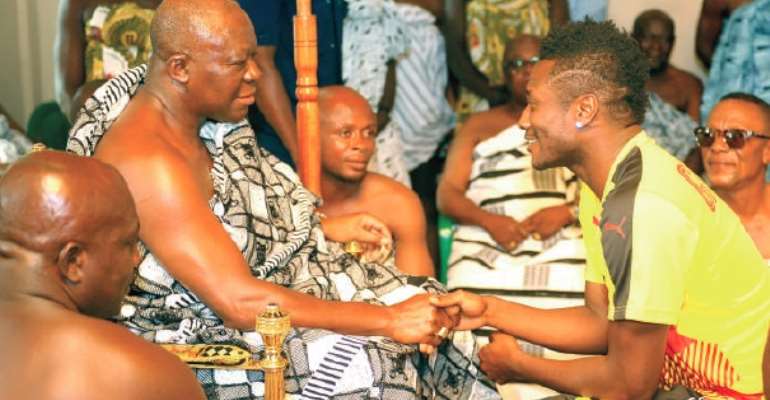 The Asantehene, Otumfuo Osei Tutu II, has asked the Black Stars not to be influenced by financial considerations when playing for the country but cautioned government to make good its promises to the players when it comes to bonus payments.

The highly-respected ruler of the Ashanti kingdom said players must be prepared to sacrifice a little for the nation which is going through financial challenges, insisting the combination of the two will bring back the excitement that characterised the team sometime past.

He said it was a privilege to be selected out of over 24 million people to play for the national team and urged them to kill themselves to pick the three maximum points in the AFCON Cameroun 2019 qualifier against the Walias of Ethiopia at the Baba Yara Stadium tomorrow.

The Asantehene also said in the wake of the reduction of the amount in bonuses for the players, government must to be truthful to the players to avoid the agitations that affected the Black Stars at the 2014 World Cup.

Addressing the players, technical handlers and the management team at the Manhyia Palace on Friday ahead of the Ethiopia clash, the Asantehene mentioned the government's policy to slash the current winning bonus by half and encouraged the players to accept the offer to demonstrate to Ghanaians that they were not playing because of money.

Otumfuo Osei Tutu II expressed his confidence in the team, saying that they had made the nation proud before and was sure that the Stars would win on Sunday.

He cautioned the media against spreading fake news which tend to bring division among the playing body, especially between captain Asamoah Gyan and his deputy, Andre Dede Ayew.

The Asantehene said such practice did not augur well for team-building and that if care was not taken, it could lead to unending conflict in the Black Stars.

Earlier, Muslims in the team joined other Muslims at the Kumasi Central Mosque to offer prayers at which the Ashanti Regional Chief Iman, Sheikh Abdul Mumin Harou, prayed for the success of the team on Sunday.

The Stars later presented assorted items worth hundreds of Ghana cedis to the Kumasi Children's Home as part of their charity project.

Gyan, together with his deputy, Andre Ayew, autographed a number of footballs as part of the package to the orphans at the home.