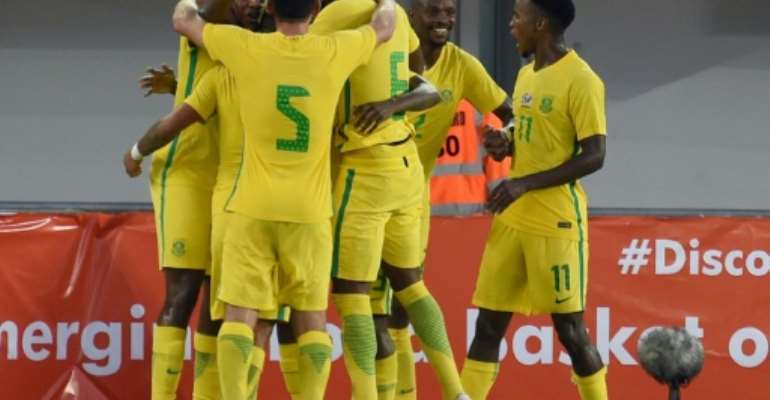 Abuja (AFP) - South Africa recorded their first-ever competitive victory over Nigeria on Saturday, winning in a 2019 Africa Cup of Nations qualifier in Uyo 2-0.

Nigeria and South Africa had clashed 12 times before, during which time Bafana Bafana's only victory was in a friendly 13 years ago.

Tekelo Rantie headed South Africa in front after 54 minutes when he powered home a cross from the right past goalkeeper Daniel Akpeyi with the Nigeria defence guilty of ball watching.

South Africa doubled their lead in the 80th minute through Percy Tau, who rounded Akpeyi to score after a fine through ball.

However, Libya lead Group E after trouncing the Seychelles 5-1 in Cairo, Egypt.

The Super Eagles had actually enjoyed more of the ball in the first 45 minutes, but could have gone behind Akpeyi spilled a cross from the left, but Themba Zwane's shot from inside the box came back off the post.

Nigeria had created several chances but Leicester City's Wilfred Ndidi fired wide on 11 minutes while Bafana Bafana goalkeeper Itumeleng Khune had to rush out of his area on 20 minutes to deny Kelechi Iheanacho a shooting chance.

Two minutes after that, Etebo Oghenekaro missed Nigeria's best opening of the half when prodding Iheanacho's cross just past the post.

The visitors played with greater adventure following the break and, after Rantie had opened the scoring, Zwane hit the post for a second time with the Nigeria defence all at sea.

The visitors had a penalty appeal turned down by the Tunisian referee after Keegan Dolly appeared to have been fouled by Chidozie Awaziem.

But Tau's strike ensured they would be going home victorious.