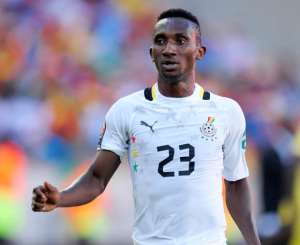 Ghana defender Harrison Affula arrived in the country on Tuesday morning ahead of the 2019 Africa Cup of Nations qualifier against Ethiopia on Sunday.

The 30-year-old, who plays for Major League Soccer side Columbus Crew is heading to Kumasi to rejoin his colleagues.

Afful's arrival was delayed due to his involvement in the MLS since Kwesi Appiah's men regrouped.

The former Kotoko star is expected to train with his teammates later on Tuesday as they continue their build up for clash against the Walia ibex at the Baba Yara stadium.

Afful has been an integral member of the Ghana squad since he marked his debut in 2008.

He has been capped 65 times by Ghana. Harrison Afful